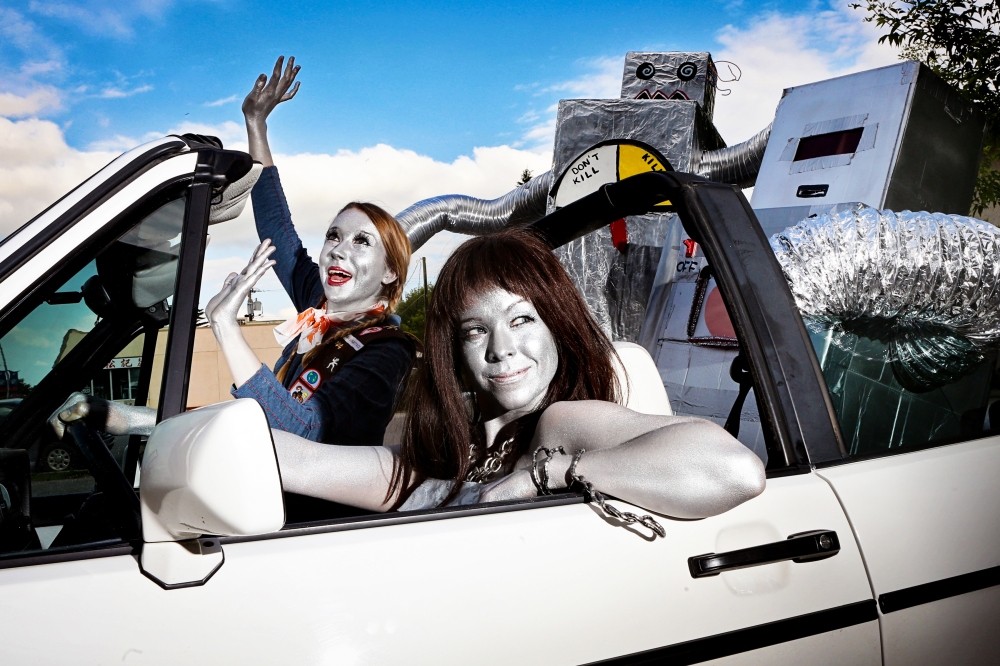 Wow, have I really been reviewing plays for that long in Calgary? That was my first thought when I learned that i-ROBOT Theatre, a play I first reviewed in June of 2011, was being remounted/reworked as part of the Beakerhead art and engineering festival. My second thought was, I wonder if they fixed the parts that didn’t work? Not that there were many of them. I quite liked this lo-fi quirky robot cautionary tale inspired by the poetry of Jason Christie the first time round. The writing at times was equal parts humorous, creepy and beautiful, the majority of the performances were outstanding and most importantly, it was a truly unique and risk-taking piece of theatre. My issues with the original production had mostly to do with the play’s go-nowhere conclusion, a risibly unnecessary dance sequence and some weak links in the cast.

So, fast forward over two and half years later, and what do we have?

Well the basic story is the same. Dreamcorp employee, Jonathan (Paul Welch) is attempting to expand the company’s already booming innovative robot business by creating human-like robots that have all the functionality of machines but the look and versatility of humans. These Perfectly Human robots (Mikaela Cochrane, Amy Sawka and Adam Schlinker) can solve hypothetical problems, anticipate the needs of their human owners and even take the role of a wife as Jonathan’s own robot spouse (Holleay Rohm  ) illustrates.

But when the big day comes for Jonathan to show major investors his new concept, they balk at the idea saying that robots with this level of emotional upgrade are more trouble than they are worth. In response, Dreamcorp CEO Jill Gerrard (Jennifer Roberts) orders the robots destroyed. But apparently human-like robots do not go gentle into that good night. The robots rebel and are either destroyed or end up in Satellite World, a kind of robot after life.

Gone thankfully is the dancing and uneven cast. Added to the production are some decidedly high-tech elements in the form of pretty flashy video and graphic projections (designed by Kaely Dekker & Tyler Klein Longmire), several extra plot trajectories in the second act and a more definitive concluding message. The problem is that some of the previously dodgy bits have been removed, but they’ve been replaced with far more problematic elements.

For a show that spends an inordinate amount of time explaining the emotional upgrades allotted to the robot characters, Director Charles Netto manages to squeeze out very little actual emotion in this production. The performances feel flat, the timing feels stilted and Jonathan’s previously very funny talking household appliances barely register a giggle from the audience. Not helping matters is a space that unless retrofitted dramatically, should never be used to house a play. Artbox on 17E may be a new, funky and much-needed art space in Calgary, but the industrial high ceilings result in terrible acoustics that completely muddy the sound causing much of the dialogue to sound garbled. In addition, several thick posts blocking key stage sight lines makes following the action hit and miss.

The new high-tech effects are certainly visually appealing, but they completely strip away the lo-fi quirkiness that made the show so enchanting in the first place. Technology is often a barrier to connection in the theatre and here it removes the audience so far away from the story-line and performers that it reduces much of the second act to utter impotency. Or maybe it was the painfully indulgent and often pretentious over-writing of the second act that stuck the knife in. The Satellite City narrative has been verbosely flushed out with multiple story lines about data mining and creating code and what robots do while they float around in this after world.  The problem is that we aren’t made to care about any of these spirit robots, so to listen to them drone on about who they are and what they want is an exercise in watching the clock hoping it will be over soon. To make matters worse, when the exhausting play does come to an end, the audience is treated to a clichéd ‘moral of the story’ conclusion that is a cross between a Hallmark greeting card and an amateur sci-fi comic book.

i-ROBOT Theatre remains risky storytelling and for that I applaud the Swallow-A-Bicycle gang. This is not your traditional boy meets girl or ubiquitous family dysfunction story.  But it was the risk they took in telling a futuristic story with little to no budget and low tech charm that make this play such a compelling piece of theatre in its original form. Dressing it up, giving it a plot enlargement and passing it off as a ground-breaking piece of tech theatre is neither risky nor interesting. It’s just more for the sake of it. Or more correctly in this case, more at the expense of it.

For Robot lovers – Well there are certainly a lot of androids in the play and you might be more intrigued by the data-mining love fest and tech references in the second act than I was, but that doesn’t mean you’ll actually connect to the story or find it thrilling. MAYBE SEE IT

For poetry lovers – Christie’s verse features more prominently in the second act and is at times quite intriguing and even beautiful. But it is so bogged down by hi-tech hubris and an endless parade of unnecessary narrative tangents that much of the enjoyment is sucked from his writings. SKIP IT

For the occasional theatre goer – While the first act does have the drama and tension you need in a narrative to keep you interested, it isn’t compelling enough to wow you nor will you feel anything but confused and bored once act two sets off. SKIP IT

For theatre junkies – It’s hard to see such a good idea overworked to the point of tedium. Those that saw and enjoyed this play first time around should keep that memory safe by avoiding this iteration. Those that have not seen it, well you will be impressed by the uniqueness of the concept but the flatness of all execution will leave you cold. SKIP IT