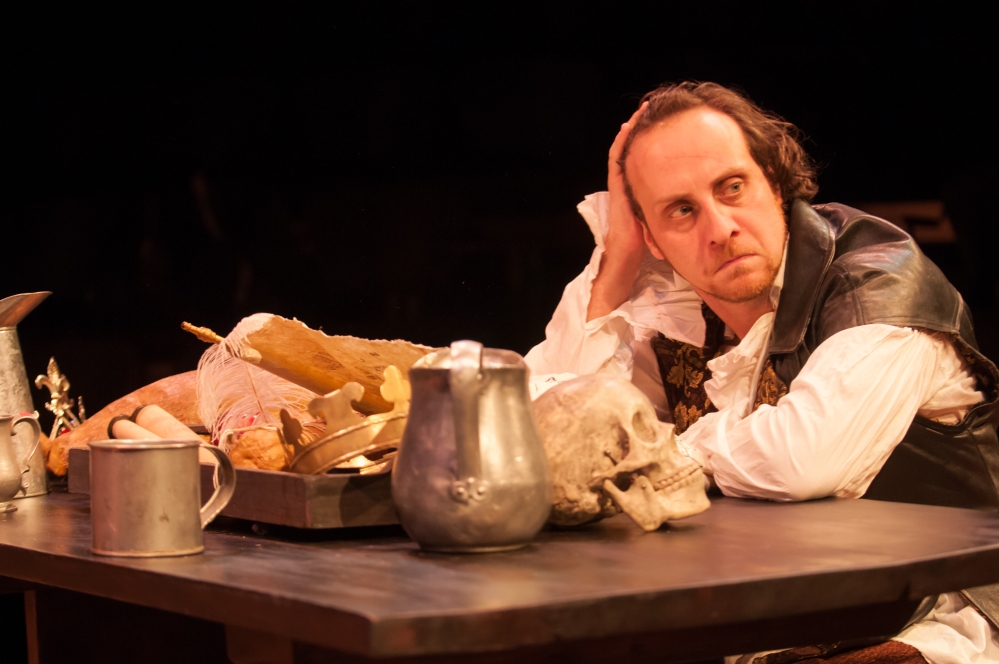 Land of the Dead

Studio at the Vertigo Theatre Centre

According to the online bible of all things film/TV related IMBd (The Internet Movie Database), there were no fewer that sixty-nine zombie movies made last year. While some might say that number is astonishing, others will point to the fact that zombie movies are relatively cheap to produce and come with a built-in audience of rabid horror flick fans. These fans not only see the movies in theatres, but will also stream or purchase the after-market versions, generating even more profit for the film-makers.

Upon closer look however, it isn’t just the expected slasher movie crowd that’s into zombies these days, nor is it just the usual suspects taking on the telling of these undead stories. Mega Hollywood stars Bill Murray and Woody Harrelson had their go starring in the intelligently spoofy yet creepy 2009 Zombieland. AMC’s runaway hit The Walking Dead has almost consistently been the highest-rated show among viewers 18 to 49 and boasts some decidedly non-traditional horror genre fans. Perhaps the weirdest mainstream zombie success of late has been Seth Grahame-Smith’s 2009 bestselling novel  Pride and Prejudice and Zombies, which integrated the classic Jane Austen tale with modern zombie lore. It seems like you can’t turn around these days without bumping into an undead character infiltrating our cultural output. So what gives?

According to Clemson University professor Sarah Lauro, this latest fad is a direct result of the disempowered, tough economic times we live in.  “Zombie-themed things rise in popularity when societies feel dead inside — figuratively speaking — because of cultural dissatisfaction and economic upheaval”, says Lauro. In other words,  we feel dead, so we watch dead. I have no idea if playwright John Heimbuch was experiencing this malaise when he penned the 2008 mashup play Land of the Dead, combining none other than William Shakespeare with zombie fiction. But having seen  the recent production by The Shakespeare Company, Ground Zero Theatre and Hit & Myth, frankly I don’t care what state of mind Heimbuch was in. I’m just glad he was in it.

Ninety percent Shakespeare, seven percent zombie and three percent modern horror mayhem, this cleverly written, in-jokey, self-reverential comedy uses the parlance, play references and real life drama of William Shakespeare as a backdrop for a zombie attack. The date is 1599 and Shakespeare’s Henry V opens the newly built Globe Playhouse in London. Will Kemp, a former actor with the company, crashes the play hoping to bring his famous role of Falstaff back to life much to Shakespeare’s artistic disgust.  Adding to Will’s stress is a visit by Francis Bacon, attorney general of London and sideline author, who has written a play to court the Queen’s favour. Knowing that a new production will receive greater acceptance if passed off as a Shakespeare original, Bacon bribes Will into claiming it as his own despite Shakespeare’s strong issue with the script and subject. While the arguments rage inside the backstage spaces of The Globe, a far greater menace is brewing outside the walls of the theatre. It seems an ‘affliction’ has taken hold of England in the form of a zombie plague. After several of Will’s players are bitten and turned into zombies, the Globe is quarantined, but not before the Queen herself and a smattering of her guards also take shelter in the fledgling theatre. Are they safe locked up in the Globe? Is there a cure? Who is willing to risk and fight? And will this be the end of them all?

It all sounds terribly silly on paper, and in lesser hands I suppose it would be. But this production is so superbly realized on almost every level that you can’t help but sit back and let the quick-witted Shakespearean nods delight your intellectual funny bone while at the same time being amused at the somehow fitting absurdity of the zombie intrusion on this famous theatrical bunch. Marvellously directed by Kevin McKendrick, never once does the play fall into groan-worthy camp. Instead McKendrick manages to balance with astonishing cohesion the more formal action of his Shakespearean actors with the horror effects of his zombie players. Never could I imagine it would feel so natural to watch a zombie bite a chunk off a palace guard while the rest of the cast clamoured about in full Shakespearean language.

This is not to say that language is taken all that seriously in this play. One of the delights of Land of the Dead is how much the play takes the piss out of the dialogue and the characters. At one point when Shakespeare asks Will, “From whence he came”, the response from Will is, “Can’t you just speak normal for once?!” These beautifully delivered lines were the extraordinary handiwork of two of the cast’s strongest performances. Richard Kenyon plays a delightfully opportunistic and resentful  Will Kemp with agile inflection and energetic phrasing. Haysam Kadri as Shakespeare once again shows why he is one of the most versatile and talented actors in Calgary with his perfectly executed sulky and temperamental take on the famously revered playwright.  Also of note were Joel Cochrane’s bombastic Bacon played with gleeful arrogance, Karl Sine’s controlled and loyal  Richard Burbage (Shakespeare’s friend and star player), Julie Guy’s plucky costume sewer Kate and Kelsey Flower’s hysterical turn as John Rice, the boy who plays the lady in the company. In fact the only weak note in this remarkably strong cast was Lenette Randall who’s Queen Elizabeth just couldn’t rise to the level of talent displayed by the other actors.

But even with all this remarkable dialogue, direction and acting, Land of the Dead suffers from one fatal problem. It’s billed as a play that both Shakespeare and horror film fans can enjoy and that’s a claim way beyond the boundaries of what this show can offer. So much of the delight of this play relies on riffs from Shakespeare’s works and nods to real events in his life, that unless you are in on the joke, you’re left wondering what all the theatre students in the audience are laughing about. Occasionally the general audience will get it –  it’s hard to miss the ‘To be, or not to be’ moment. But what of the rumour that Bacon wrote all of Shakespeare’s plays? Or that the Globe was actually built by Burbage and his brother out of pilfered material? Or the muddling up of Romeo and Juliet’s lines with other famous quotes in one of the final scenes? What about the resurrection of Falstaff as a metaphor for the zombie apocalypse to some? These will be lost on the average horror aficionado who no doubt will be tapping their fingers in boredom wondering when the zombie stuff is finally going to happen.

Zombie entertainment may be big business these days and I appreciate that Land of the Dead wants to cash in on the trend. But rather than trying to lure an audience that may not walk away smiling with their intellect and lust for blood sated, my hope is that this show owns up to what it really is. An extremely funny play for Shakespeare lovers with a bit of a dark and twisted side. Now that’s a description you can sign me up for anytime.

For zombie fans – You have to sit through to the end of an overly long first act before even one zombie shows up and then they appear only sparingly in Act 2. Even with some good biting, tearing of flesh and blood-soaked scenes, there just isn’t enough zombie in this zombie play to make it work for you. SKIP IT

For Shakespeare fans – Unless you are a purist that can’t stand anything but the most classic reverential production of Will’s work, you’ll love this smartly spoofy treatment of Shakespeare and his colleagues. The zombie stuff is pure icing that will make you laugh without dumbing the play down one iota. SEE IT

For the theater junkie – Even if you aren’t as up on your Shakespeare as you might have once been (and really, who is?) there is lots to enjoy in this production. For the acting and direction alone this is worth getting a ticket. SEE IT