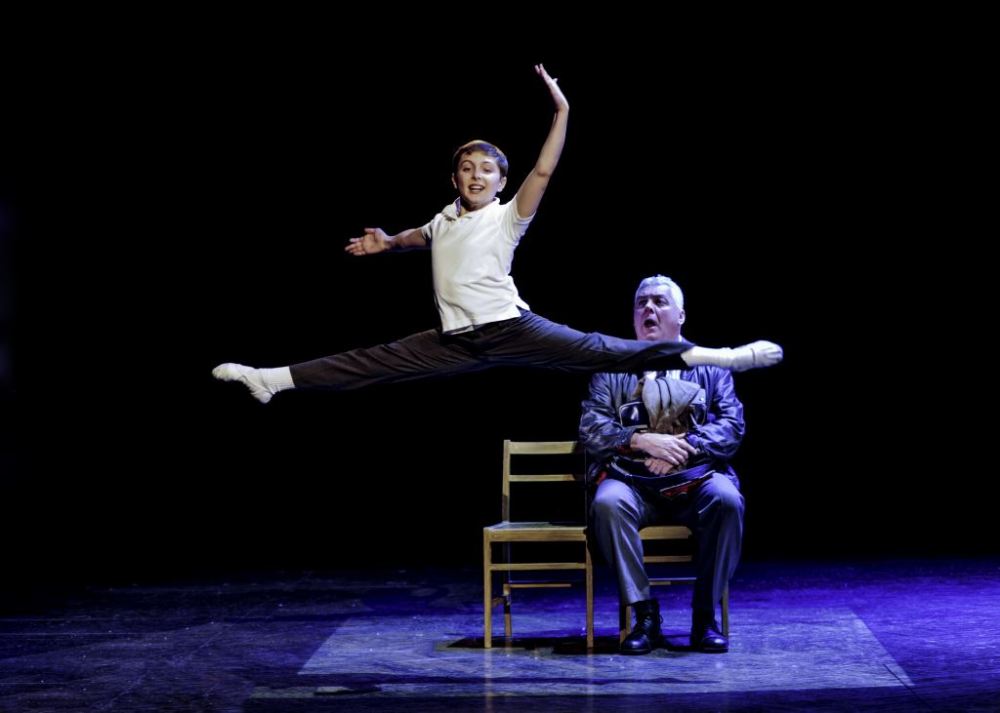 There’s an audition scene halfway through the second act of Billy Elliot the Musical where young Billy, vying for a spot at the Royal Ballet School, is asked what he loves about dancing. After several meatless, non-answer answers, Billy finally admits (in song and dance) that dancing makes him feel electric and free. It should be a soaring moment where the audience swells with pride knowing that with this display of heart, soul and talent, Billy is assured of a spot at the prestigious school. The problem is that while technically there is a lot to be impressed by with Billy’s dancing here and in the show’s other dance numbers, Noah Parets, who plays Billy* does so without one ounce of soul. In fact, this mechanical, matter or fact approach in both acting and direction infects most of production, making Billy Elliot a hollow visual treat with predictable characters and stock storytelling.

Based on the 2000 film, Billy Elliot, the musical with forgettable music by Elton John and book and lyrics by Lee Hall, was the toast of the stage in its day winning four Olivier Awards and ten Tony Awards including best musical. The plot revolves around the motherless Billy who discovers he likes ballet way more than the boxing lessons his father forces him to take. Billy’s struggle to have his love of dance and dreams of an artistic future accepted by his working class, male-dominated family is juxtaposed by the family’s own struggle with the historical 1984 UK miner’s strike that threatens to put them out of work for good.

Not surprising, this follow your dreams, hard-times musical is riddled with every cliché conceivable. An absent-minded, foul-mouthed, but loveable grandmother? Check. A blue-collar father who thinks dancing is for “puffs” but comes around to support his boy? Check. An inspiring teacher who turns Billy onto ballet and then pushes him to spread his wings and never look back? Check. A possibly gay, drag-dressing friend Billy can confide his love of dance to? Check. The requisite anti-Thatcher number accompanied by Maggie in contemptible effigy? Check.  The imagined ghost of his mother who appears to send love and support? Check, yet again.  The only thing saving this show from being one large groan plot-wise is a fleeting swath of intensely exciting and creative direction and one musical number that manages to lift its head above the muck. Both these moments come at you in the first act and follow one on top of another.

Following a slow and uninspired start where we meet the strikers and look in on a boxing and ballet class, Billy finds himself alone with his senile grandmother. In response to her grandson’s question about missing her dead husband, she breaks into song explaining that while he was a drunken bastard they found happiness when they went dancing. “We’d Go Dancing”, is not only a lovely bit of foreshadowing to Billy’s own escapist feelings about dance, but it’s touchingly smart lyrics and well-staged flashback treatment finally gives audience something real to connect with.

“Solidarity”, a number which moves the audience back into the real action of the play intersects three elements of the storyline in what might one of the most ingenious and successful choreographed pieces of storytelling I’ve ever seen. The miners are striking, the police are sent to quell the crowd and Billy is finally finding his feet in ballet class. The number weaves not only the lyrics of these plot points together, but has actors crashing the spaces of each other with miners acting as ballet bars and ballerina’s causing confusion for policemen. Each group of characters has a notion of solidarity that applies to their own cause, and the refrain, which is sung by each of these groups, ties the scene together in a theatrical gem. Yes, there are sniffles in Act 2 in all the expected heart-string tugging places, but unfortunately never again does Billy Elliot rise to this level of sophistication in story, lyric or staging.

But this show really isn’t about sophistication or clever lyrics. It’s a musical that hinges on our connection with Billy as we root for him with anticipation in spite of the happy ending we all know is coming. In the hands of a better actor, perhaps even this fairly automated and impersonal production that had scenes chugging along in conveyor belt fashion , could have managed to dig its way into our hearts. Parets unfortunately just doesn’t bring anything beyond being a kid that can dance and sing on key. In the end , Billy Elliot feels like a very expensive  recital of a talented kid that you know just doesn’t “have it”.

For the guys and the girls – There are some cute laughs along the way in this otherwise obvious musical. And the dancing is quite good. But much of the story drags and the inability of the actors to connect with the audience will make this fine but not necessarily fun. MAYBE SEE IT

For the occasional theatre goer – It’s a feel-good musical with some real life struggle thrown in. You’ll feel the show is a little long, but you’ll be entertained well enough. SEE IT

For the theatre junkie – Accompanying me to the show was someone who saw the original production on Broadway and she was horrified at the blandness this version offered. The two grand moments in the first act are compelling, but not worth sitting through such an obviously called-in effort. SKIP IT

*NOTE – there are three actors playing the role of Billy in this run. My review is based on the production starring Noah Parets.