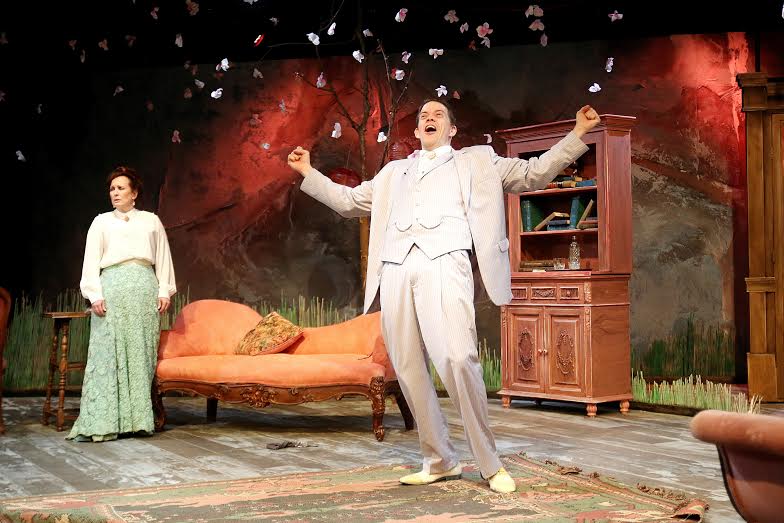 No time for a full review on Classical Theatre Company’s production of The Cherry Orchard, but if you’ll permit, some thoughts….

I need to bring up eggplant. No, I’m not having some kind of produce-inflicted nervous breakdown; it’s just that when thinking about Anton Chekhov’s final play, The Cherry Orchard, the glossy purple fruit mistakenly called a vegetable comes to mind. Bear with me, I’ll explain.

I don’t care for eggplant. I’ve tried it in all its various forms… fried, whipped, baked, smeared, but it just doesn’t suit my palate. I know I should like it. It’s past being trendy, is a staple in so many cuisines and is beloved by many. Plus it’s good for you in that vitamin, mineral, antioxidant kinda way. But try and taste as I might, I can never muster anything more than, a half-hearted, “it’s OK” reaction to it.

Theatrically, The Cherry Orchard is my eggplant. I know I should like it. I know it’s revered. I am well aware of why it’s such an important piece and all the nifty things Chekhov oozed into it. Plus I know there are many in my profession that would have my credentials taken away for even suggesting that it doesn’t float my boat. But honesty above optics – that’s my story and I’m sticking to it.

On a more serious note, I’ve seen many incarnations of the play and not once have I felt the sum total of the experience matched what I wanted from this piece. Classical Theatre’s effort falls into this same category for me. It’s good, very good in spots, but the parts that leave me cold are a chill I can’t shake.

For those that don’t know the play – here’s the cliff notes:   It’s the turn of the 20th century and a recently penniless aristocratic Russian woman and her family return to their family estate and surrounding beloved cherry orchard. The land and house are being auctioned off in order to pay the mortgage. The family has the chance to save the land and house, but instead blithely do nothing about it. In the end, a former serf become rich businessman buys the estate and chops the orchard down to make room for new housing development. Chekov takes aims at both sides of the economic divide in this play, skewering each for their frivolity and shallowness.  Many have thought it to be heavy and dreary – Chekov always meant it as a dark comedy.

So, my bias firmly communicated, onto the production…..

Ryan McGettigan’s set design is a lovely minimalist interpretation. Interiors come to life with just a few salmon coloured velvet couches, chairs and a simply carved small wooden bookcase that becomes the odd object of lustful affection. The use of an open parasol and a picnic bench serve to conjure a park setting with the same lovely economy.

But it’s McGettigan’s cherry orchard that really brings the simple beauty to the set. Flanking the entire upstage length as a kind of pseudo backdrop are three stick figure trees. It would look like a Charlie Brown Christmas kind of joke but for the dozens of white with pink origami blossoms that are dangled with invisible string from and above the branches, making them seem as though they are falling rising in the air at the same time. The sense of calm and comforting whimsy this evokes is a nice foil to the angsty and at times incongruous action happening on stage.

Performances – well most of them

There are a good handful of strong performances in this production as I’ve come to expect from Classical Theatre. Of particular note are Celeste Roberts as the frivolous and at times imperious Lubov, Mark Roberts as the inanely talkative and infantile Gaev, Mathew Keenan as the humorless intellectual Trofimov and Erin Kidwell as the understandably frustrated and lovelorn Varya.

Chekhov has set up characters that talk nonstop but never truly hear each other. Or themselves for that matter. This is a cast that is up to task without tipping the production over into an absurdist genre.

It’s not often that I give special mention to how props are moved on and off the stage, but here director John Johnson has choreographed it such that notice is asked to be paid.

With the lights dimmed and over the pleasant trill of orchestral upbeat music, Johnson stages a productive business that has his cast moving, arranging, adding and subtracting set pieces like graceful worker ants. As the characters waltz on an offstage, arranging props here and there and occasionally stopping to silently chat, it’s like watching a Chekhovian ballet play out and it’s delightful.

But take note, this should not be a passive looking. Johnson has cleverly snuck in some very funny bits during these interstitials that dissolve sweetly in your mouth like good inside jokes.

Johnson has a confident hand in this production, allowing the serious oddness and the messages conveyed to stand on their own without too much fuss. However when it comes to the funny bits, Johnston overcompensates in what I assume is a desire to eschew the play’s reputation as a heavy downer and instead highlight the humour.

It’s an admirable desire, but in doing so, Johnson cheapens things by  injecting  ill-fitting slapstick moments that go for the easy laugh instead of the witty nod. To name a few – A foot that is injured in order to con money is shown to us jumping in glee once the handout is given. A flirting maid is allowed to ham it up to the point of farce.

They may be small events in a two act play, but they happened enough that it felt as though the production was groaning and straining with the effort to BE FUNNY.

Ehrhardt’s performance as the flirty maid mentioned above was the one weak link in the otherwise strongly acted production. Much of the blame here goes to Johnson for allowing her to tip towards uninteresting silliness in her efforts to lust or fret or show disdain. This in combination with a delivery that seemed far more modern and out of step with the rest of the cast, made Ehrhardt appear like the miscast piece in an otherwise nicely crafted puzzle.

Even with its issues, Johnson and his team offer up a solidly fine show. I can’t say that I gleaned anything new or exciting about the work from this production. And I can’t say that I walked away liking the play any more or less than I had previously. Perhaps this is due to a blockage on my behalf where The Cherry Orchard is concerned or maybe this occurred because the show didn’t dig deep enough to inspire. There is probably blame enough on both sides of that argument.

Meanwhile if anyone has a killer recipe that they swear will change my mind and make me a lover of eggplant, I’m all ears.