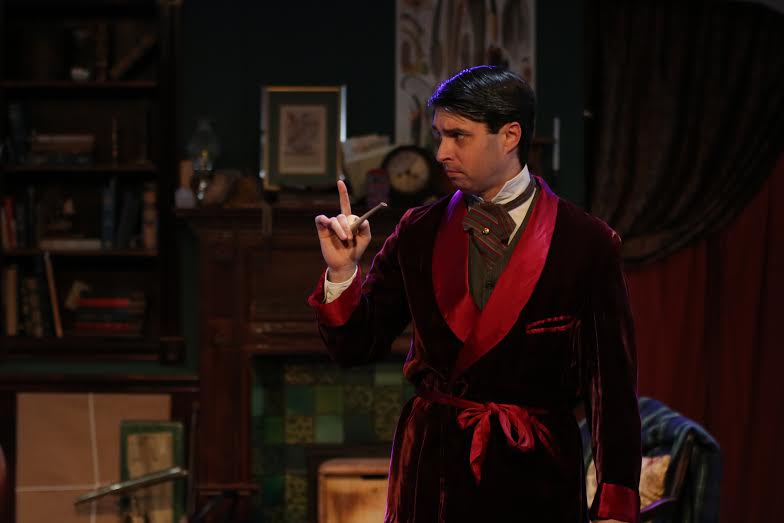 Ah Sherlock. Between being given new big screen life thanks to the highest paid actor in Hollywood (box office magic, Robert Downey Jr.)  and your present small screen triumphs (Jonny Lee Miller’s version on CBS and Benedict Cumberbatch’s fan favorite turn on BBC) you really are in vogue these days. So it’s no surprise that the Classical Theatre Company would want to bring a version of your tale to the stage. From the cross-section of folks cramming the theatre opening night, it seems like we’re still hungy for more of the famous detective’s deducing.  Bums in seats is never a bad thing for a company to wish for and accomplish.

But are we there to see a familiar character in a safely formulaic story so that we can all sit back, not work too hard and enjoy? Or are we there to see new life and insights breathed into a character we thought we knew? This version, adapted by Timothy N. Evers and directed by Troy Scheid gives us lots of the former and a respectable amount of the latter. And yet still, the thing feels off. Like something is missing. And it doesn’t take a Sherlockian brain to realize that some ill-conceived staging and a flawed storyline is the thing that ultimately murders this play.

The Speckled Band: An Adventure of Sherlock Holmes tells the tale of Helen Stoner (Amelia Fischer) and her controlling, violent-tempered stepfather, Dr. Roylott (a wonderfully bombastic and caustic James Belcher) . Helen and her sister Julia have been living with Roylott since their mother’s inexplicable death and as the play opens, we learn that now Julia too has died mysteriously. On the eve of her wedding, no less.  We also learn fairly quickly of some provision wherein Roylott loses his inherited fortune should either of his stepdaughters marry. As Helen’s own wedding quickly approaches with her betrothed out-of-town, she turns to her friend Dr. Watson (an easy to like Andrew Love) who suggests she employ the notorious Sherlock Homes (a superbly weird and wonderful John Johnston) to save her from certain death.

And therein lays the problem. Where’s the mystery? We know that Roylott is the killer right from the get go. We know that Helen is his next target and why. Yes, we don’t know exactly how Roylott did and will do it again. Had we been given suspenseful tension we might have cared to find out. Instead, Scheid gives us scenes of lukewarm violence where neither actor commits to the moment. Roylott grabs Helen, pushes her and at one point tries to strangle her, but there is such hesitancy in the staging that any feeling of alarm is snuffed out.  If Helen is truly frightened, Fischer does very little outside of delivering the dialogue to show it. In fairness to her, the script doesn’t help. On the eve of her possible death, Helen willingly lets Roylott into her room for a heated chat. Really? Risible plot points like this can’t help but put you in mind of bad 1980’s horror films….the house is haunted? Sure, we’ll go in! Helen might not die the moment she lets her murderer into her room, but our belief in any bloodcurdling feeling being elicited by this play perishes on the spot.

So it is a tremendous accomplishment that there can still be much to enjoy in this production. Well, if much were to mean the portrayal and staging of the great detective himself. It is Sherlock we’ve come to see and it’s a marvellous Sherlock we get. One that is subtly modernized for our ear (thanks to Evers adaptation which removes anachronistic language such as the famous elementary line), given full rein to be both laughed at and with (by Scheid’s fine sense of comedic direction) and in glorious oddball form thanks to Johnson’s refreshing portrayal.

Slightly effete yet moving without any grace whatsoever, Johnson’s Sherlock flatfoots it around the stage with the bug-eyed,  hair smoothing, face touching tics and twitches of a slightly off kilter genius. Nothing is ever put down in its proper place. Papers are simply dropped where he stands and coats are flung to lie wherever they may. It’s a lovely touch for a character that has far more pressing mystery solving things to think about. But it’s really the voice that makes it all come together. Speaking at a clip far faster than the rest of the cast, Johnson rails off deductions like they were puffs of air all the while rolling his r’s in a somewhat derisive manner to wonderful effect. Nowhere here is a Sherlock that is in the least bit attractive or awe striking. Instead we are given a Sherlock who is the adult version of the creepy, socially awkward brilliant kid at the back of the class no one wanted to play with. It’s a distinct departure from recent portrayals (with Lee Miller’s being the closest) and it not only gives us a different view of the character, it opens up the possibilities of the humour tremendously.

Possibility is also the name of the game when it comes to set design in this show. Claire A. Jac Jones’ ambitious set that conjures no less than five different settings are nicely realized if cumbersome process. Each set change, accompanied by a blacked out stage and a mournful violin soundtrack, seems to go on forever as props are dragged in and backdrops are switched out. This is not a show that can afford to lose what tenous hold it has on the plot’s tension. Perhaps less ambitious design might have helped the woefully limp script and kept us more engaged with the actual so-called mystery of the play.

Instead we are left to be engaged by Sherlock, which may not mean a holistic theatre experience, but thankfully here does mean a light and fun way to spend a couple of hours.

For Sherlock fans – It’s a different take on the great detective. Sherlock is far more oddball than impressive genius in this show. But it’s done with such comedic finesse that it’s bound to delight. SEE IT

For mystery fans – Lack of tension or suspense or a mystery that anyone gives a hoot about will leave you cold. SKIP IT

For occasional theatre goers – This is easy, digestible, old-fashioned type of non-heady entertainment with some very strong performances in familiar roles. It may not be a fancy, edge of your seat production, but it might just suit what you are after. MAYBE SEE IT

For theatre junkies – With such polar opposite hits and misses in the production it comes down to what matters more, plausible plotline that creates drama onstage or delight in a terrific performance.  Only you can decide this one. MAYBE SEE IT