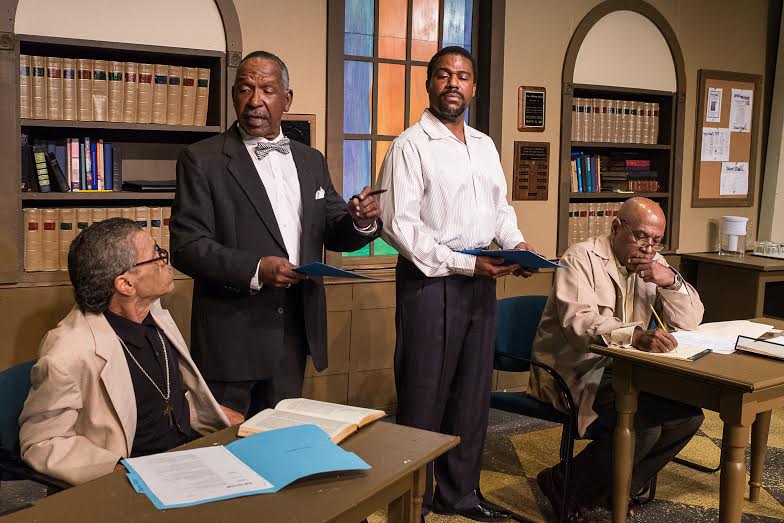 Women in the Pit

When Mt. Zion’s church secretary, Patricia, asks to take time off to attend a free breast cancer screening clinic, the cantankerous and distinctly old-fashioned Elder Block crabs, “That’s a perfect example of why don’t want a woman in the pulpit, too much stuff….mammograms….menstruation….menopause.” It’s a line that gets the entire audience at Joyce Sylvester’s Woman in the Pit laughing and perhaps thinking that this kind of light comedy will bear the weight of the play. But while Woman in the Pit, a story of a flailing traditional black Baptist church considering hiring a female pastor is terrifically funny in parts, Sylvester’s narrative is not altogether a laughing matter. In fact it’s quite serious and even dire in parts. The result is a play that is both refreshingly surprising yet at times overstuffed with ideas and asides that nevertheless grabs our attention throughout.

Like many modern-day houses of worship, Mt. Zion is having a hard time engaging its dwindling congregation and failing miserably at bringing in new members. The fact that the church has not had a regular pastor for the last several years certainly hasn’t helped. The play opens with the male leaders of the church meeting to vet the latest round of candidates for the job. Deacon Reed (played with smooth dexterity by Jason E. Carmichael) is the modern of the bunch. The year is 2008 and Reed is strongly in the Obama camp and ready for real progressive change in the church. Deacon Bonds (the instantly likeable James West) lands somewhere in middle ground. Bonds is cautious but open to hearing all sides. In grand juxtaposition to the Deacons is Elder Block (Wayne DeHart, a pitch perfect study in petulance) who has no time for interpretation of the word of God especially if it challenges his traditional and even misogynist views. Everyone’s capacity for change gets tested when Elder Mason (strongly played with warmth by Byron Jacquet) announces that the late edition candidate, the one with the best qualifications on paper, is in fact a woman. A woman,  Elder Mason insists they must interview and allow an audition sermon at their pulpit during Sunday services.

Thus sets up Sylvester’s tension and arc of the play. Relying heaving on biblical passages to pepper the dialogue and inform the debate (staring with 1 Corinthians 14:34-35 which states that women must stay silent in the church, right through to several new testament examples of women preaching the word), Woman in the Pit is as much a debate in Christian gender and race politics as it is an intriguing story. Smartly, Sylvester doesn’t let her play bog down in to “issue” mode and instead employs humour and more than a few unexpected twists and turns, including the biggest one early in the play (no spoilers here!) to keep the audience on their toes.

By the time the men have met Reverend E.R. George (Lisa Thomas-Morrison) and debated her merits as a pastor, a woman and her fit with the church, we’ve been treated to several zigs and zags in the storyline that send us from laughter to serious thought. One can’t help but notice that in a play about preaching, and one that in fact does have a message to convey, we never really feel we’re being preached to thanks to some nimble writing.

Therefore it’s a shame that Sylvester had to go and overcook the stew by throwing in an excessively complex and unnecessary side story to the play. Without giving anything away, Reverend George has some skeletons in her closet that she and her daughter Mira (Rachel Hemphill Dickson) bicker about in several scenes throughout the play. While we can appreciate Sylvester’s attempt to give the Reverend’s character context and then to tie it back into the conclusion of the play, the messiness of this second narrative often felt like this was two plays stuffed into one. Not helping matters was the utter lack of mother/daughter energy between the two performers. Not once did their interaction feel genuine or meaningful which was a sharp contrast to the almost liquid ease of the rest of the play’s action.

A great part of that ease is thanks to Eileen J. Morris’s direction which teases out authenticity from the men and the interview scenes. Her staging here is minimal and generously allows her cast equal time to flash their comedic timing and adeptness at heavier dialogue. What she couldn’t muster from the mother daughter scenes, she more than makes up for with the rest of the play. James V. Thomas’ set is perhaps too bathed in 70’s harvest gold for a church in 2008 but is serviceable to the story nonetheless. The small apartment he crafts for the Reverend and Mira brings some needed colour and warmth to the set.

Much to the chagrin of religious literalists, modern believers pick and choose the parts of the bible they wish to follow. Perhaps then this is the way to view Women in the Pit. Sure there are some parts that don’t quite resonate or feel necessary. But the parts that do, well when it comes to these elements in this play, I have faith.

For non-Christians – The debate about the place of women in positions of religious power is something that every religion (or non-believer) can relate to. Sylvester has employed Christian faith and biblical passages to push her narrative, but the story is intriguing and germane regardless what you believe in. SEE IT

‘yes, women should be preachers’ side of the divide; this isn’t a liberal free for all. Elder Block (who by the way gets most of the funny lines in the play) is given just as much room to voice his opinions as the others. You may not like that a woman at the pulpit is even being discussed, but since the discussion is happening, perhaps watching it unfold onstage will be of interest. MAYBE SEE IT

For the occasional theatre goer – The side story here makes this play more complex than you probably bargained for.  This isn’t light entertainment with some issue stuff thrown in. But the production is slick, there are some outstanding performances and it’s an opportunity to laugh and think. SEE IT

For theater junkies – Overcooking a play is a tough pill to swallow. Especially one as promising as this. Then there’s the balance between the great and not so great performances. Still, taking the bad with the good in this play nets out to a perfectly entertaining production. And there is nothing wrong with that. SEE IT