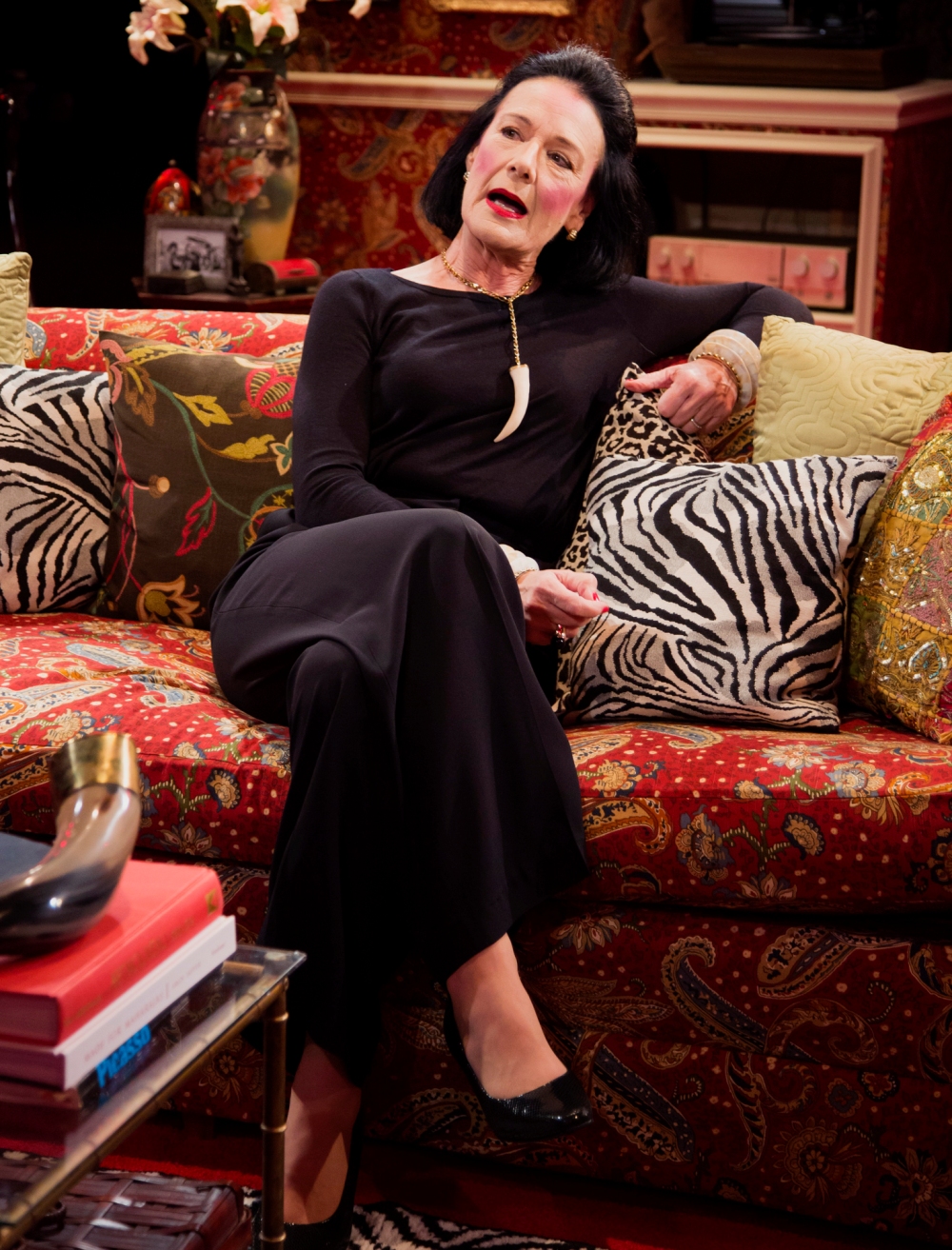 “Vulgarity is marvellous! We all need a splash of bad taste. No taste is what I’m against”. So says the recently deposed Vogue Editor in Chief, Diana Vreeland about halfway through Mark Hampton and Mary Louise Wilson’s 1995 one woman show, Full Gallop, about Vreeland’s post magazine career move. It’s a marvellously brassy line, one of many, in this somewhat rambling two-act play that lives or dies on the force of the Vreeland performance. Thankfully, Stages Theatre under the direction of Kenn McLaughlin, has made sure the fashion icon’s shoes are filled to the brim. Reprising the role (which she played on the same stage in 1999), Sally Edmundson chews the set with her portrayal of the ballsy dame of high fashion and delivers a performance that more often than not compensates for a script that has a tendency to veer into dullness.

We meet Vreeland in 1971 in her ornately decorated, red-hued New York apartment wonderfully created on set by Jodi Bobvrosky. She has just returned from several months abroad in Europe to lick her wounds after unceremoniously and with no explanation being dumped from Vogue. Such is life in the fashion business Vreeland tells us. One day you are in, the next you are out. But out doesn’t mean down. At least not yet. Clad in her signature black clothing with war paint rouge, Vreeland is planning a dinner party where she is hoping that a notoriously oily backer will come to her rescue and somehow reinstall her position in the fashion industry. Or at least her assistant Yvonne is planning it. Vreeland barks orders at the put upon French woman (voiced by Maria Edmundson) via an intercom in her living room with great bluster despite the ever crumbling circumstances of the evening. Vreeland’s cook fails to show up, the food she ordered won’t arrive, even if it does she can’t pay for it and worst of all, the rich oily gentleman will not be joining them. But then the dinner party really isn’t the point of the play. Hampton and Wilson use the evening instead to unleash Vreeland on the audience, allowing her to pontificate directly to us as though we were a confidant. Or at least an arm’s length one.

The script works best when Vreeland treats us to the juicy inner workings of the fashion world. The time that cosmetic magnate Helena Rubenstein and Coco Chanel had a tete a tete in her apartment. The method by which Vogue Editors get canned. The frustration of shopping at Bloomingdales. In the one genuine emotional moment, Vreeland describes the death by cancer of her beloved husband and this too draws us in. But amidst all the bon mots and gossip is endless name dropping, self-aggrandizing  and pedantry about other minor people and places that may very well be faithful to the true nature of the woman, but it doesn’t make it all that interesting to listen to despite Edmondson’s formidable performance. Also not helping matters (at least on opening eve) was the straining we needed to do to hear the full breadth of the monologue. Working in a theater in the round configuration, Edmundson’s voice at times seemed to be swallowed up by all the signature red brocade in her apartment often giving a muffled tone to her words.

By the close of the play, Vreeland’s dinner party is a bust, but not her career thanks to a new opportunity taken that those in the fashion know will nod their heads approvingly at.  And despite our minds wandering and our eyes glazing at times, we can’t help but be captivated by this larger than life character brought vividly to life by such a talented performer. “It’s not the clothes, it’s the people who wear them”, says Vreeland. In the case of Full Gallop, it’ not the script, it’s the actress who delivers it.

For fashionistas – Although you will wish for more inner workings of the fashion industry as told by Vreeland, there is lots of good gossip and talk of designers and clothing and style and taste to keep you happy. SEE IT

For the style averse – Make no mistake, this is an insider play where if you don’t know your Bunny Mellon from your Balenciaga you will be left if the dust. Still, Edmundson plays Vreeland with such unironic bombast that it’s hard not to be amused even if you’re not exactly sure what she’s talking about half the time. MAYBE SEE IT

For the occasional theatre goer – Solo performances are often hard to love due to their talkiness and general lack of action in the plot. And Vreeland certainly talks up a storm in this show. But it’s wonderfully funny in spots and terrifically performed despite meandering at times. MAYBE SEE IT

For theater junkies – This is one of those bio-plays you will refer to as a confection. Fun to look at and certainly entertaining for the most part, but lacking any real substance or character examination. No one will walk out of Full Gallop truly understanding what made Vreeland tick. And yes, the script needs a good edit. But Edmundson is a delight to watch and her talent mostly trumps the failings of the play. MAYBE SEE IT