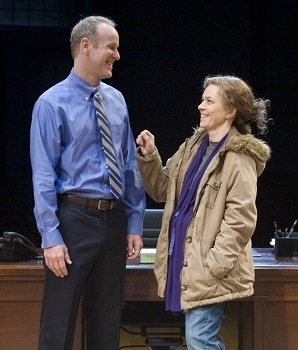 (L-R) Chris Hutchison as Mike and Elizabeth Bunch as Margaret in the Alley Theatre’s production of Good People. Photo by John Everett.

You have to like a playwright who can go from writing the emotionally heart wrenching drama Rabbit Hole, about parents dealing with their child’s death, to penning the book and score for the cartoon turned stage version of Shrek The Musical. Not to mention that both efforts were prestigiously awarded –  Rabbit Hole with the 2007 Pulitzer Prize for Drama and Shrek The Musical with a Grammy and two Tony’s, just to name a few. But if you think that David Lindsay-Abaire’s talents are dichotomously enviable based on these two successes alone, then you will turn even greener than, well Shrek himself, after taking in the Alley Theatre’s production of Good People, Lindsay-Abaire’s 2011 Tony nominated comedic drama. Directed with raucous energy by James Black, Good People allows Lindsay-Abaire to terrifically blend his talent for pain and humour while acerbically examining the class divide and considering if we ultimately are where we come from.

The where for consideration in Good People is Boston. And not just any random part of Boston, but rather the ‘Lower End’ of South Boston where poverty reigns, thuggery abounds and those with any chance at all try their hardest to get out. It’s where Margie and Mike are both from, but not where they’ve ended up. Margie (Elizabeth Bunch) got stuck in her 20’s when she became pregnant and gave birth to a mentally handicapped daughter named Joyce. Dreams about getting out were quickly replaced by a series of low paying jobs to make ends meet, none of which she manged to keep for long due to the challenges of caring for a permanently dependant Joyce. Not that Margie ever had any big dreams or real potential mind you. That was the domain of Mike (Chris Hutchinson), a rough but smart boy who, thanks to a father that pushed him and the brains to follow it through, went to College and became a doctor.

Margie leans about “old Mikey’s” good fortune when her friend Jean (Melissa Pritchett) spots him giving at speech at the hotel where she works. Jean mentions Mike because Margie has once again been fired, this time from a dollar store for being “unreliable” and is hairline close to not making rent. Why not ask Mike for a job, suggests Jean. Agreeing that, “Mikey was always good people” and not wanting to have to work the factory line at the Gillette plant, Margie agrees that asking Mike for work is the best plan. But the Mike she knew twenty five years ago (and briefly dated) is the not the Mike she finds in his chic office with the pretty secretaries and a photo of his young and elegant wife and daughter on his desk. Mike hasn’t just moved out of Southie but he’s moved on and while tickled in a kind of nostalgic way to see Margie again, there is no room for her with her rough manners and shabby clothes in his practice. It’s the start of a test of wills based on income divide and life choices that plays out for the remainder of the show. Margie accuses Mike of becoming “lace curtain” while Mike protests  his change while trying to navigate Margie’s accusations which become increasingly problematic for him and possibly his marriage.

The first act of the play is a an entertaining romp through Southie humor filled mostly with light tension and many laughs. Margie and her friends Jean and her landlady Dottie (Jennifer Harmon) provide great chuckles as a kind of anti Sex and the City gal gang. Instead of discussing Manolos and drinking cosmos, these pals drink instant coffee and discuss who’s in jail, who owes who money and whether they can afford to go to bingo. Even Margie and Mike’s interaction stays precariously light-hearted in the first act. They rib each other, they take pot shots and by a turn of saving-face events, Mike invites Margie to the birthday party his wife is throwing him at his fancy house in Chesnut Hill. It’s Margie attendance at the party that kicks off the second act and shifts the tone of the play from blisteringly funny to a still comedic but darker place where both Margie and Mike have to face the uncomfortable truth of their pasts and the choices they’ve made.

Through both tones of the production, Black navigates his cast beautifully. His simple and uncluttered staging allows space for these energetic actors to yell and fight and fill up the theatre with their sass and resentment and hurt. The theatre in the round set up serves as a nice metaphor to Lindsay-Abaire’s notions that people’s lives can be viewed from all sides and that no decision is every truly right or wrong. Kevin Rigdon’s rotating minimal sets function well as place indicators without stealing the thunder of the actors. And ultimately it’s the cast in this play that’s the draw. Yes Lindsay-Abaire ‘s writing here is taut and biting and thoughtful, but in the wrong hands, it could have come off a just another Southie send up.

As the unquestionable star of the show, Bunch’s Margie is the perfect mix of tough and vulnerable, confident and insecure. Affecting a darn good accent, Bunch plays a woman a full of pride, beaten down by poor decisions but still swinging with suck pluck that we love her even when we want to strangle her. Hutchinson gets off to a somewhat shaky start accent-wise but blows the roof off the theatre once his indignation and discomfort gets going in the second act. Utterly believable in his squirming, Hutchinson takes the play up a notch and never lets it come back down. Krystel Lucas as Mike’s wife, Kate, does an impressive job playing the woman out of the loop but knowing too much. Her dressing down of Margie near the end of the play is one of the highlights of the evening. Margie’s ex-boss and now Bingo buddy Stevie is sweetly played by Dylan Godwin who gives the surprise punch at the play’s conclusion none of us saw coming. As Jean, Melissa Pritchett affects her best Rosanne Barr (if she were from South Boston) with perfect comedic timing and Harmon as the clueless but mouthy and nosy Dottie keeps us in stitches throughout the play.

By the time we get to the unfortunately too hermetically sealed ending (why oh why couldn’t have Lindsay- Abaire left us to wonder at the end of his splendid script?) we have laughed, changed our minds about characters and had our hearts broken just a little. Mostly we realize that while some people are called ‘good people’….nothing is quite that simple.

For comedy lovers – The laughs are fast, frequent, sometimes foul-mouthed but always genuine in this witty play. Yes the comedy has a darker more meaningful undertone as the play rides along, but that won’t stop you from laughing along with a deeper thought or two. SEE IT

For the occasional theatre goer – This show is a powder cake from start to finish that will sweep you up and entertain you at every turn. The play may be set in South Boston, but the questions raised and the themes explored are universal. SEE IT

For the theatre junkie – Lindsay-Abaire’s way with words – rough on one level but tenderly telling on another is a gift worth investing in. Yes, the ending is far more tidy that was necessary, but it’s a small flaw that an extraordinary cast and some strong direction overcomes with ease. SEE IT