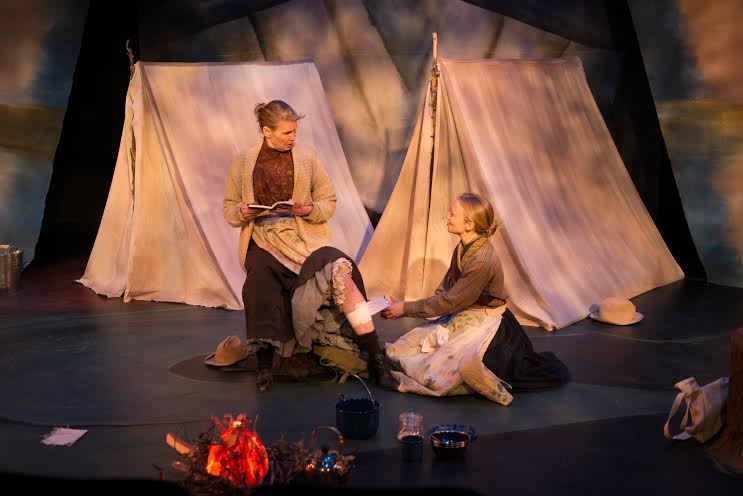 Nothing brings to mind the 1898 northern wilderness of the Yukon less than the muted, pastel-toned abstract paintings of Georges Braque. Yet these seem to be the inspiration for Erin Gruber’s ill-fitting backdrop images for Rosemary Rowe’s equally poorly constructed play Camp Victoria. Inspired by the true story of Canadian journalist Faith Fenton and the Victorian Order of Nurses who, along with a military battalion, hiked the Klondike towards Dawson city, Rowe’s play under the direction of Glenda Stirling, attempts to imagine what those adventurous women would have talked and dreamed about. Not much if we are to believe what’s presented on stage.

The setup to get the women alone is fine enough. The proper and no-nonsense Nurse Hanna (played with confident correctness by Shawna Burnett) and the more innocent and breezy Nurse Payson (portrayed with a cadence far too modern by Julie Orton) find themselves separated from their soldier guides after stopping to tend a wounded private. The women’s worries about being stranded are momentarily quashed when they realize that Globe journalist Faith (played with humorous pluck by Lindsay Burns) will be back shortly with a map that will allow the woman to catch up with the soldiers. But upon Faith’s arrival, the map is nowhere to be found and once again the women despair that they are stranded in their hostile environment. Between the cold, the lack of food and the howls of wolves, it doesn’t take long for the booze to come out (medicinal they rationalize to get over their belief in temperance) and their lips and attitudes to start loosening.

Had the inebriation revealed pity insights, perhaps the done to death ‘drunk so we talk truth’ arc could have been overlooked. But instead we get mere top notes of what life was like for these women and even less penetration on what they longed for. Yes they are all subject to men in one way or another. Nurse Hanna is tired of answering to doctors who sometimes know less than she does. But Rowe gives Hanna a secret (too easily revealed) that feels both out-of-place with the point of the play and not in keeping with the close to the chest/orthodox nature of her character. Nurse Payson weakly asserts that she likes being in the field so she can just do her job unbothered but her ambition doesn’t fly farther than taking a nice trip with her mother. Rowe here gives us a character that is essentially milquetoast, leaving us wondering why we would waste an hour wanting to get inside her head at all. The spirit of what the play is trying to communicate is best captured through Faith, who turns out not to be the ballsy and famous reporter her melodramatic writing shows her as, but instead a lonely woman trying to navigate her way through a man’s world as best she can.

The misleading marketing for Camp Victoria sells the play as a story of stranded women imagining what it would be like to establish a matriarchal society in the Yukon. In truth, the idea is only brought up near the end of the play, talked about in an inebriated state and then dropped like a hot potato at the show’s conclusion when the women realize that they are not stranded after all. The resulting lack of meaning or substance doesn’t make the show unwatchable, it just makes it forgettable.

Nurse Hannah, Nurse Payton and Faith Fenton are Canadian characters with rich history to tell us. It’s a shame that instead Rowe has given us tipsy talk. Because as anyone who has ever listened in on a drunken conversation knows, it’s only truly interesting and insightful to those doing the drinking.

For the occasional theater goer – This is a light and easily digestible 60 minute story. You’ll get a very minor glimpse of what life was life for these women and that may be enough for you. Decent to strong performances help bring personality to the story and often a smile and a giggle to the audience. MAYBE SEE IT

For the theatre junkie – Meatless writing, personality-less direction and an incredibly distracting set design make Camp Victoria easy to pass on.  Which is unfortunate as Lindsay Burns does turn in a show stealing performance. SKIP IT