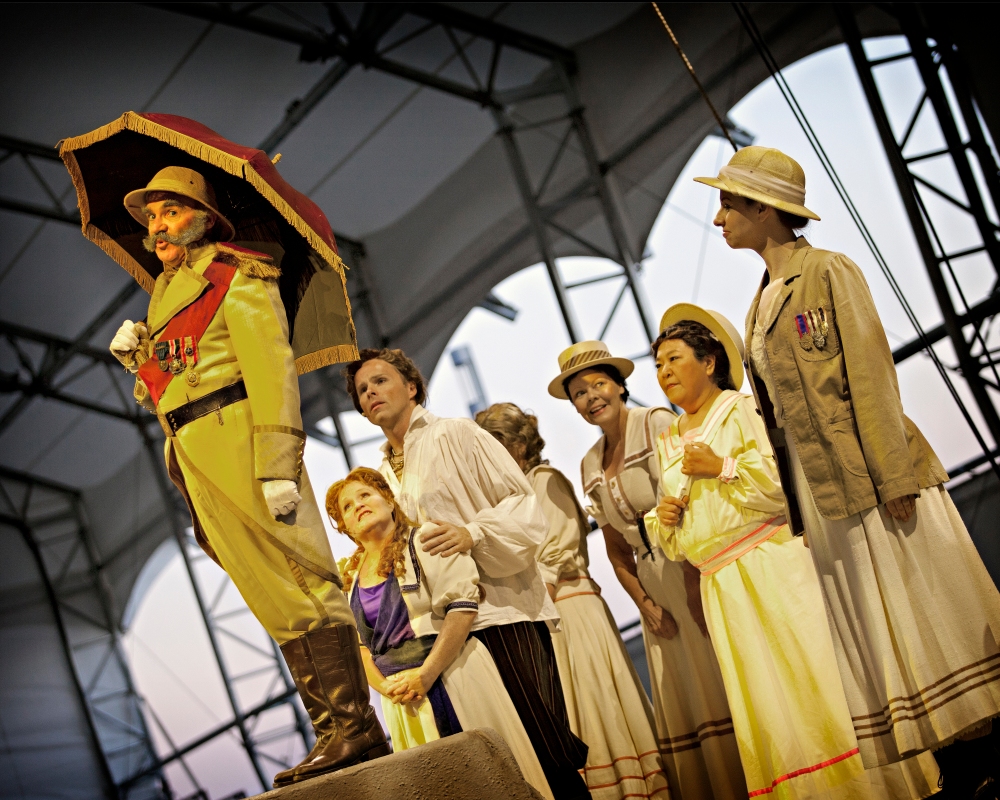 Well, Sullivan might have been pleased but I’m sure Gilbert is rolling over in his grave somewhere. Calgary Opera’s inaugural outdoor summer opera festival, this year featuring Pirates of Penzance, just may be the first time an English Canadian audience needed surtitles to understand a Victorian-era comic operetta.

The fifth of librettist W.S. Gilbert and composer Arthur Sullivan’s collaborations, Pirates of Penzance, tells the story of Fredric, who at 21 years old is released from his promised apprenticeship to a band of fairly ineffectual and rather nice pirates. A free man, Fredric falls in love with Mabel, the youngest daughter of Major-General Stanley and vows to help arrest the pirates.  However he soon finds out that while he has lived 21 years, he is actually only five years old due to his leap year birthday. A man of duty first and foremost, Fredric agrees to go back to the pirates to serve out his remaining 63 years. The couple is devastated by the news but Mabel swears to wait for him which turns out, due to some convenient twists, isn’t as long as either of them dread. Like many comedic stories, the plot wraps up neat and tidy if not altogether plausible.

If plot put to music is all you planned on getting out of the show, you’d be in luck because any essence of the inspired and witty language Gilbert infused into Pirates is frustratingly missing in this production. Gone are the wonderful tongue twisters and humorous wording tied to Sullivan’s ear-wormy music, not because the lyrics have been changed but because they are so poorly enunciated as to render them unrecognizable. Part of the issue I’m sure has to do with the challenge of singing underneath an open-air tent and all the competing outdoor noise that accompanies it. But the majority of the problem were the performers themselves who simply failed to enunciate and instead treated the libretto as grand opera (singing with the majesty of vocal acrobatics) rather than operetta (opera-like vocals treated more lightly with attention paid to recitative style).

In addition to the muddy lyrics, the show also suffered from a disappointingly weak male chorus that seemed to at all times be performing through a foam filter. Whether it was the pirates singing the beloved, “Cat-like tread” or the constables delivering the equally hummable, “”When a felon’s not engaged in his employment”, the result was underwhelmingly banal due to lack of vocal power.

Thankfully the leads helped make up for this deficit. Both Tyler Fitzgerald (Samuel) and Brett Polegato (The Pirate King) channelling Johnny Depp-like fey pirates, held strong with clear baritone voices that were equally matched with Colin Ainsworth’s (Frederic) sweet tenor delivery. David LeReaney (Major-General Stanley) stayed the truest to the operetta style of performance and was rewarded heartily by the audience for it. Soprano Tracy Dahl (Mabel) outshone everyone with her range and control even if her operatic flights of fancy rendered her words comprehensively impotent.

Comprehension was not a problem when topical barbs were dropped into the libretto throughout the show.  Jokes about parliamentary proroguing or lines nodding to the recent flooding and name-dropping Calgary’s mayor brought great bursts of laughter from the audience despite the obvious and forced nature of their inclusion. The late Elmore Leonard said that if something sounds like writing you should erase it and start again. To my ear these attempts to bring familiar modern references into the show stank of try-hard writing and going for the easy laugh. Not exactly the way Gilbert wanted his lines to play out, I’m afraid.

But play out it did on a serviceable set designed by Terry Gunvordahl, with a tight stage that seemed to challenge Director Robert Herriot’s ability to move his actors around in a fluid or confident manner.  In fact, much of the stage direction looked like fits and starts to real action that fizzled out before it really gained momentum. Conductor Gordon Gerrard led the orchestra in a fine interpretation of Sullivan’s music but rarely provided the large sound that might have propelled the chorus to amp up the energy or the musical direction needed to help performers be better understood.

The inaugural performance of Canada’s first outdoor summer opera festival is a great accomplishment for Calgary and something we can all be proud of. But it looks like it might be another year before we can be as proud of the performance as we are about the idea of it.

For Gilbert and Sullivan lovers – Pirates of Penzance without the language is a tragedy and while you may know the words, you still want to hear them performed. Some lovely singing and a fun atmosphere won’t make up for the deficit. SKIP IT

For the occasional theatre goer – It’s a fun night out at a silly, casual show that doesn’t require much attention and has a few impressive voices. You’ll recognize some of the music and might not care that you aren’t hearing everything being sung. SEE IT

For the theatre junkie – You could almost say that Gilbert and Sullivan have been strip-mined they have been so often performed. But classics are classics for a reason –that is until they are stripped of what made them good in the first place. Language and big choral performances are crucial to Pirates of Penzance and without it, it just isn’t good theatre. SKIP IT