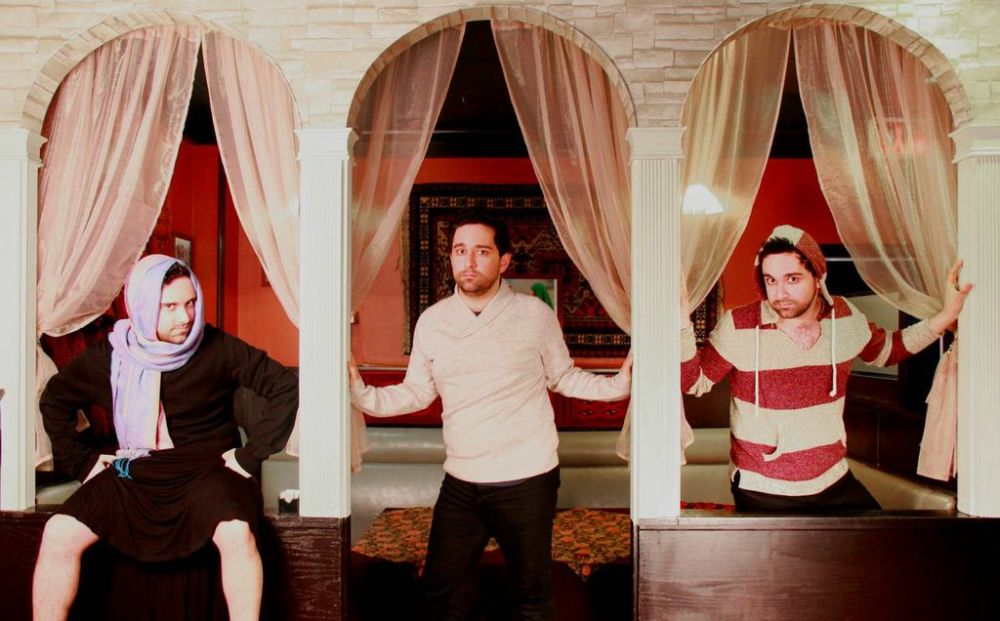 Recently we’ve been bombarded with news coverage on Russia’s anti-gay laws as they pertain to the upcoming 2014 Winter Olympics in Sochi. Many are outraged by the oppression not just for visiting athletes, but for the Russian gay community that has to live with this grim reality on a day-to-day basis.

But if Russia has made being gay difficult, Iran has made it deadly. Article 111 of Iran’s Islamic Penal Code states that not only is homosexuality a crime, but it is a crime punishable by death. This oppressive law is the central theme and motivator behind Borderland, and uneven but well-intended play written and performed by Izad Etemadi.

At the opening of the show we meet Navid, a gay Iranian 20-something hiding out in the back of a truck being smuggled out of Iran. He’s on his way to a holding place called Borderland, where he will await his immigration papers to a country where he can live freely. It’s a bit of a shaky start in both performance and staging with Navid hiding under a blanket, not hiding, talking and singing in a flip/flop kind of fashion that does little to convey what must be a terrifying escape. Etemadi doesn’t do himself any favour either by having Navid met at his drop point by a clichéd and fairly wooden thug who is more interested in having Navid help him hide his drugs then he is in actually saving Navid from certain death.

When Navid finally reaches his safe house, owned by a needlessly over the top woman named Layla, I started checking out of what I had hoped would be a moving and insightful piece of theatre. While I  wasn’t charmed by Etemadi’s attempt to inject humour to his show via Layla I was even more turned off by the sudden breaking into non-sequitur original song (composed by  Peggy Hogan) that Navid seemed to be doing haphazardly throughout the show.

However just when I had given up hope, the plot turned from the present to the past and we were shown the sweet and somewhat innocent blossoming of Navid’s sexuality and his first true love. Wow, was I snapped back to attention for these scenes. Etemadi is a loveable and genuine presence onstage and when he first feels loves, we feel it with him and when that love goes wrong, our hearts break for him. Not to mention that while we are swooning or crying along with him, we are also very aware that his life is in peril due to the gender of his affections.

Unfortunately Borderland doesn’t linger long enough in the past to make up for its failings in other scenes resulting in a show that had me in the palm of its hand one minute and totally lost me the next. But I will give extra points for an ending that doesn’t take the obvious road and leaves the audience with no question of the plight of gay men and women in Iran.

For Fringeaholics – While this is probably the only political/social play on this Fringe’s roster and one that takes on an important subject, the unevenness makes it hard to really get fully involved with this script in the way that one would hope. MAYBE SEE IT

For light Fringers – Seeing a play about such an important issue is almost a must. But when the play doesn’t quite live up to the importance of the subject it addresses, it makes it hard to single it out. MAYBE SEE IT