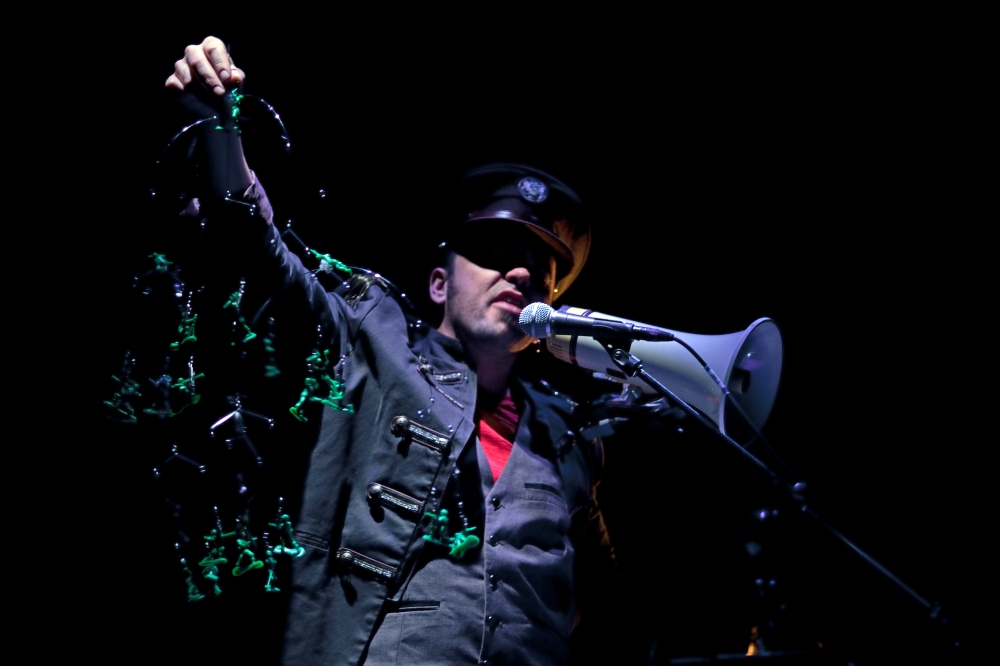 The God That Comes

If a show is cool, does that automatically mean it’s good? It’s an important question to ponder when seeing Juno Award winner Hawksley Workman and Christian Barry’s new show, The God That Comes, a song cycle performance based on the mythology of Bacchus, the Greek God of Wine. From the minute the audience enters the theatre, coolness abounds. With most of the seating set up cabaret-style, cocktail tables are draped in sexy red linens adorned with lush bunches of red grapes, the smell of incense hangs heavy in the air, the dim lighting suggests an after-hours underground club and audience members are happily sipping on plentiful glasses of wine. We are in the mood.

Workman takes the stage to tell us that this first bit isn’t the show. What it is, he explains, is the story that the show will address. Smartly here Barry (the playwright and director) realizes that not everyone in the audience will be fluent in Greek mythology, so Hawksley spells it all out for us. Once upon a time there was an oppressive and cold-hearted king who was obsessed with rules and order. Then there appeared a God in the mountains who embraced all things hedonistic; sex, wine, dancing – the fun things in life. The kingdom’s women and slaves think this sounds pretty darn good, so off they run to the mountain to take part in the God’s fun, upsetting the King greatly. Especially when he learns that his own mother is taking part in these pleasure orgies. To find out just what the devil is going on; the King disguises himself in women’s clothing at night and climbs the mountain to observe. Things don’t go very well for him from there. The crowd mistakes him for a wild animal and in their passion-filled frenzy they turn on him and tear him to pieces with his own mother cutting off his head to present to the God.

The next seventy minutes or so are the show and here we get even more cool.  Workman accompanies his singing on the drums, guitar, keyboard and ukulele in what can best be described as a concept album concert/solo musical play that has him telling the Bacchus story by taking on the personas of the God, the King and his mother. What pushes the show beyond simply a thematic concert is Barry’s dark and  moody direction which utilizes on stage costumed mannequins representing the three characters, lighting to indicate who the songs are about, flashing neon words beside the stage emphasizing the scene’s dramatic message and recorded sound transitions that allow Workman to move between instruments and characters.

Workman for his part not only belts out the 12 songs that comprise this album/show, he becomes the characters through first person lyrics. He sings belligerently and with military force as the King, with more dreamy luxury as the God and with a slightly soft falsetto as the mother. There’s no question that Workman is a talented performer as a musician/singer and as a storyteller. But talent here doesn’t necessarily mean all the songs work musically or as a narrative element. Of the dozen songs that comprise the show, about half of them held the audience rapt.  The percussion-pounding beat of the drum-fronted song Invocation (You Know What It Is, Come to the Mountain), started things off on a remarkably high note. The Dress Makes the Man, with its wry humour depicting the King’s possible delight at his drag transformation kept the audience laughing at its silly cleverness. Poignantly delivered and on par with Workman’s more accessible music were the beautifully cerebral If Your Prayer, depicting the meeting of the King and the God and the haunting Can You Believe?, describing the shock at the King’s death.

But along with the magical theatrical musical moments came some grating, tiresome and even clichéd attempts. The most egregious of these included Remember Our Wars, which is nothing more than a screeching effort by the King to establish his dominant personality and the overwrought and empathy-sucking  He’s Mine, in which the Mother laments her son’s death with shallow motivation that is given no dramatic explanation.

You would think that because these songs are the only hook the audience has into this concert as a theatrical performance, the failing of half of them should mean the failing of half the play. Not exactly a good ratio when reviewing a performance.  But here’s the thing…. It’s that pesky coolness again. The show is so unique, creative and visually stimulating and Workman is such a charismatic, compelling performer that even if the bad closely equals the good in a narrative sense, we don’t care. The experience is the message when it comes to this show and on that front Workman and Barry deliver big time. We are transported and we are seduced and we do buy into the risks these artists took in staging this performance. So while I’ll put my criticisms out there for the record, I’ll happily now sit back and say I was very glad to have been able to take part in it all.

For the guys and the girls – You don’t need to be a Workman fan to appreciate this show, but you do need to be open to an alt rock kind of metaphorical and theatrical type of storytelling. I will bet it’s unlike anything you’ve seen before and for some of you that alone will be enough to love this show, even with its flaws. MAYBE SEE IT

For the occasional theater goer – Non theater-going music fans might like that this show is more a  concert than a dialogue driven play.  But those looking for a traditionally fun musical will be confused and disappointed. SKIP IT

For the theatre junkie – Yes not all of it works, but the risks taken and successes achieved in this show on many levels are well worth your time. SEE IT