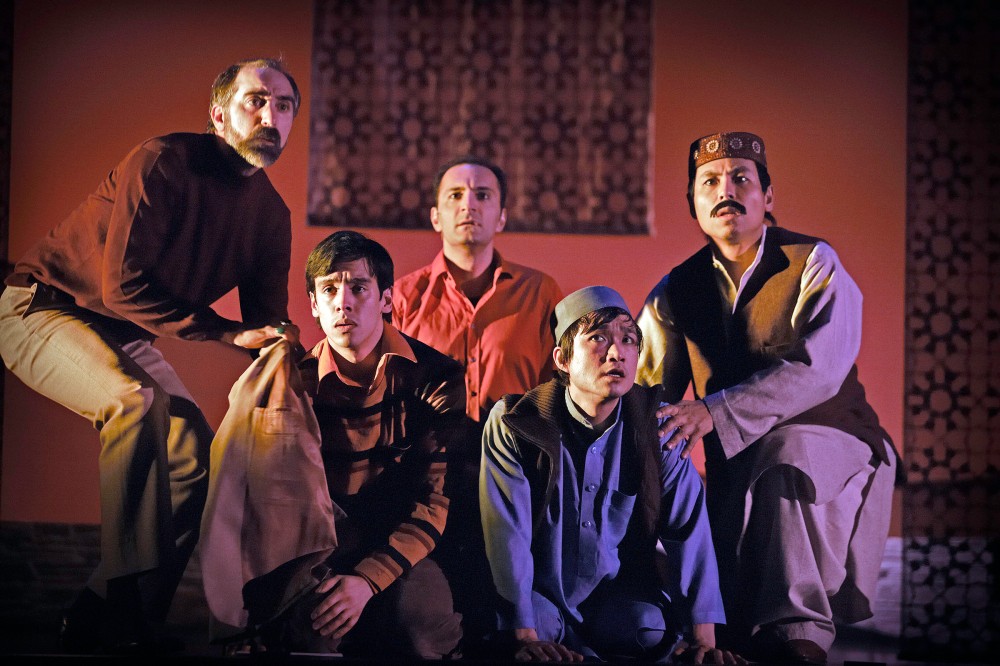 Listen to my review on CBC’s Eyeopener at

Never, ever see the movie version. This is my steadfast personal rule after reading a novel I deeply enjoy. Not because the film adaptation is necessarily not up to snuff (although let’s face it, many of them aren’t), but because I like to keep alive my own imaginative memories of the people, places and situations evoked between the pages, undisturbed by the biases and agendas of Hollywood or some other movie-maker. However, as a theater critic, the luxury of banning from your cannon all productions based on novels you enjoyed is not only impossible, it’s ill-advised. Especially when it’s done with as much thought, subtlety and confidence as Theatre Calgary’s Canadian Premiere of The Kite Runner in coproduction with Edmonton’s Citadel Theatre.

Economically and elegantly directed by Eric Rose, The Kite Runner is a stage adaptation that comes with the baggage of great expectation due to the sheer force of the story’s success. Khaled Hossein’s novel about two Afghan boys of different caste was published in 2003 and went on to become an international bestseller, claiming millions of copies published in approximately 70 countries. The movie version followed just a few years later with Marc Forster’s 2007 film adaptation which garnered Oscar and Golden Globe nominations and won several other critical awards. Seemingly undaunted by the story’s already wide exposure and possible critical saturation, playwright Matthew Spangler took his turn adapting the novel for the stage in his 2009 San Jose production. Spangler’s efforts paid off winning no less than five San Francisco Bay Area Theatre Critics’ Circle Awards, including awards for Original Script and Overall Production. In other words – Rose and his team had big shoes to fill. And despite some questionable narrative techniques in Act I, this production is yet another successful notch in The Kite Runner saga.

Staying remarkably true to the original novel right down to the first person narrative, Spangler’s adaptation tells the story of a Kabul boy named Amir, a wealthy Pashtun (the dominant ruling class in Afghanistan pre 1980’s Soviet invasion) who betrays his servant/friend Hassan, a Hazara (an ethnically oppressed Afghan minority) in order to win his father’s approval and love. Tormented by his deeds, Amir struggles the rest of his life with these demons until the opportunity for redemption, “to be good again “presents itself. Running concurrently with the boys’ narrative, is the very real historical backdrop of Afghanistan at that time. The play’s timeline addresses the fall of the monarchy, the Soviet invasion, the mass exodus of Afghan refugees to Pakistan and the United States and the Taliban regime. Ambitious in its scope, the story spans thirty years and two continents, presenting a great challenge for any director. Rose’s clever answer to the challenge is to not get carried away with the preciousness of place. Instead he allows the strength of many performances, evocative live drumming by the talented Salar Nader and Kerem Cetinel’s moody lighting and metaphorically minimal set design to stand in for literal translations of the many emotional and physical spaces the story inhabits.

The first half of the play unfolds through the adult narration of Amir (played by Anousha Alamian with expertly balanced intensity and energy) as he recounts the events of his younger self (a somewhat reserved Conor Wylie) and Hassan (played with disappointingly little emotional oomph by Norman Yeung). The audience learns of the dynamic between the master and servant-informed friendship between the boys, Amir’s jealousy of his father’s affection for Hassan, the community’s racism towards the Hazara people and the ultimate horrific events that lead Amir to inexcusably abandon and betray Hassan.  But if there is such thing as a feeling between being over and underwhelmed, then I would have to assert that I was simply whelmed by the treatment of these events. Having a narrator shadow himself as a younger boy, literally standing beside or behind every action, was both distracting and distancing. Especially when dealing with flashcard storytelling where no scene is more than a mere few minutes long. Just as I was trying to relate to the younger Amir and Hassan, there was the older Amir talking to us, pulling the audience out of the real connection with the characters and actors on stage. Thankfully this annoyance was overshadowed by both Alamian’s strong performance and the extremely compelling character of Amir’s father, Baba (the fantastic Michael Peng). Also distracting from this narrative tick was, ironically, the fact that set-wise, there was little to distract from the action. Cetinel’s bare-minimum design with just  few chairs or a desk when called for, clean-looking backdrops, moody lighting that often reduced to a black set with just one spotlight gave an impressively intimate feeling that beautifully matched Rose’s considered staging. The wonderful eponymous kite running scene, with its unfussy design and staging was a stunning example of how to do more with less.

But Act II is really when this play takes flight. Here the action shifts post exodus to San Francisco (again evoked with a gorgeous light hand by Cetinel) where finally the adult Amir is unleashed allowing Alamain to both narrate and act for himself resulting in a much-needed bond between character and audience. It is with this connection that we watch his new life in the USA unfold, including first love, marriage, his father’s illness and his lingering torment about his actions towards Hassan. By this point, the audience is so enthralled with Amir and his struggles that no one seems to mind the soap-opera-ish turn of events that send him back to Afghanistan in search of redemption for his sins. Frankly the somewhat hackneyed final plot twist that ultimately results in a fairly hermetically sealed conclusion bothered me as much in the book as it did in the theatre. I would have liked an ending less obvious. But after going on such a long journey with Amir, it is totally understandable why readers, and now audiences, eat this ending up with such relish.

The Kite Runner shows us a dark side to our souls, offers up the possibility of goodness and shows us a world that many Westerners know nothing about. Put quite expertly on stage in this worthy production the story will no doubt satisfy those who already loved the story and easily make fans out of newcomers to the tale.

For the guys and the girls – At the heart of his story are the universal themes of jealousy, weakness and striving for goodness that we can all relate to. Throw in an historically fascinating backdrop and a unique cultural glimpse and you will find enjoyment all around. SEE IT

For the occasional theatre goer – the minimal sets and bare design might throw you, but stay with it and you will quickly be won over by the emotional story. SEE IT

For the theatre junkie – Some great performances, beautifully balanced direction and design with a story you can’t help but fall for. SEE IT