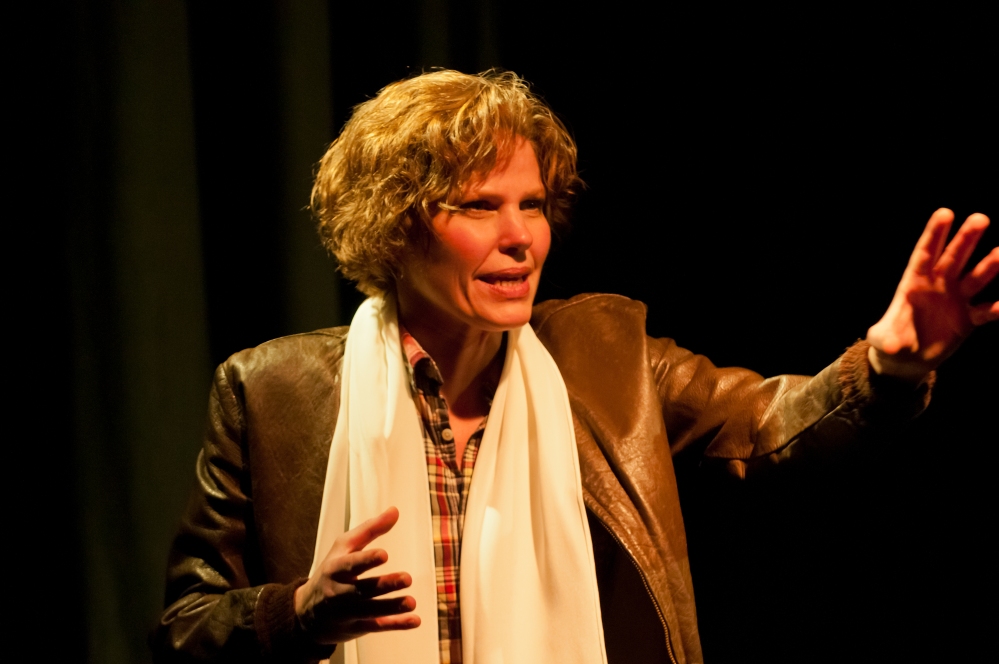 I am a true sucker for a solo show. It strips bare all the bells and whistles of the theatre experience and demands greatness from both the actor and the playwright. When done well, I find this raw exposure of talent terribly interesting and exciting. Mathew Heiti’s  world premiere show Aviatrix, a mostly solo performance about Amelia Earhart’s final voyage, hits many of my excellence benchmarks for this type of one-woman show. Unfortunately, Aviatrix  is also littered with enough shortcomings to keep it from being a truly spectacular show.

The play opens with radio announcements rattling  off all of Amelia’s pre 1937 accomplishments – first woman to fly solo across the Atlantic, speed records set, awards from Congress and even breaking her own records. It’s an impressive list that sets us up to meet the woman herself, played by Chantal Perron who strides out in masculine-style fly gear complete with leather hood and goggles onto a dramatically lit bare stage with nothing but the radio and a stool. It’s her 1937 final flight where she attempts to circumnavigate the globe around the belt of the equator that she wants to talk about.

Heiti employs a past/present/future method to get at the story. Amelia weaves her tale for the audience in three time zones flipping back and forth between moments as the pieces of the story start to fill in. In a nonlinear fashion we learn how her father was the one who introduced her to planes long before he became a drunk and ruined the family. We hear of her relationship with her husband GP and his concerns about her flying. In real-time we get a front row seat to the actual flight as Amelia enacts the fatal trip moment by moment. And we also get a kind of hindsight/after world version of Amelia as she comments on her career and life and speaks to us post-crash. It’s a smart structure for the play and is well-written by Heiti who thankfully trusts his audience enough to be able to follow along with a non-traditional manner of storytelling.

It’s a shame then that Heiti doesn’t trust his audience or his actress enough to let Amelia be the only voice that tells the story. Peppering the play is an out-of-body voiceover (Tyler Rive) that alternatively plays the role of Amelia’s conscious as when it interrupts her talking about an incident to chide “Liar, liar, pants on fire. Tell them what you really told your husband”, to playing Fred, Amelia’s unseen flight navigator.  Both voice overs are utilized to help push the story along. In the first case, it allows Amelia to reveal hard truths or brings audience attention to difficult situations. In the second case, it gives someone for Amelia to banter with when flying. Neither case is necessary and to my mind felt like lazy writing. With stronger work on the narrative, Amelia could have had these conversations herself or with a silent imaginary voice to much greater impact. But my real issue with the voice, was the voice itself or more specifically the actor. Rive’s delivery of both portrayals smacked of amateurish smarm that, while occasionally getting laughs from the audience, was a total wrong turn in style when compared to the rest of the show. I don’t know if Director Pamela Halstead wanted to go for the cheap laughs here, but if so, she did at the expense of breaking the otherwise expertly directed and acted spell that Amelia herself cast.

And to say a spell was put upon us by Perron as Amelia is not just a clever turn of phrase. For the one hour I sat through  Aviatrix , Perron embodied her character with such a fine tooth comb that she became Amelia for me. Whether showing us the tough cookie side of her character, the ferocious intensity when talking about her love of flying, her insecurities about retiring or her pain at her father’s death, every emotion Perron gave us rang true and clear. Physically Perron also did a wonderful job of switching back and forth between walking freely around the stage monologue-style to mimicking her piloting using only a stool to sit on, several well executed leg shakes and shoulder shrugs to make us believe she really was in that cockpit. In fact, I enjoyed Perron’s performance so much that I could even excused the good chunk of overwrought narrative that comprises the last few minutes of the play. If it were not for her excellent handling of what I felt was a hackneyed overselling of the final moments of the show, I might have left disappointed with the play as a whole for ending up in that spot. Instead, I’ll just brush it off as best I can and be thankful that such a talented actress was able to navigate through and beyond it.

A final nod to the production must go to Anton De Groot’s moody and effective lighting which set the stage for the time zone changes and made an otherwise bare stage come to life in our imagination. The fate of Earhart in Aviatrix may have been imagined (as no one really knows what befell Amelia on that final voyage) but with some terrific writing, smart direction and an outstanding performance, the play, despite its flaws, was a theatrical trip worth taking.

For the girls – It’s a chance to learn more about a woman who, if she isn’t a hero to you already, will probably be once the show is over. At the very least, you would be well within your right to throw a little worship towards Perron for her performance. SEE IT

For the guys – Not a chick play by any stretch. There’s pilot stuff and wanderlust and lots of in-flight action from an Amelia who manages to be one of the guys without being unpalatable. SEE IT

For the occasional theatre goer – Yes the storytelling in unconventional and  there are time shifts to deal with. But with such good acting and a voice over that you will probably be grateful for, you will have no problem enjoying this production. SEE IT

For the theatre junkie – Just ignore the flaws, go for Perron and watch her shine in Heiti’s mostly clever script. SEE IT