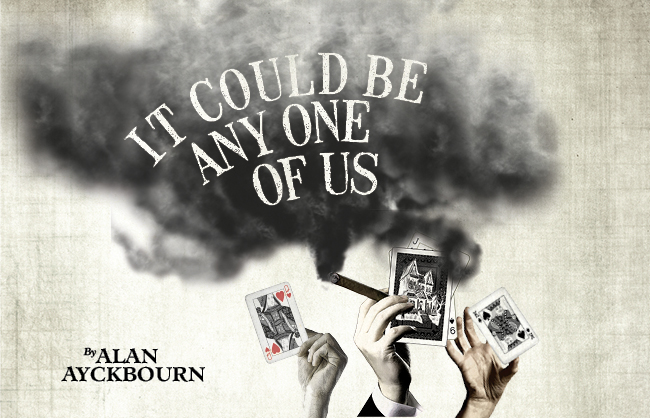 It Could Be Any One of Us

Listen to my review on CBC’s Eyeopener at http://www.cbc.ca/eyeopener/columnists/theatre/2012/11/16/theatre-review-it-could-be-any-one-of-us/

If I’m to be honest, I wasn’t especially looking forward to seeing Vertigo Theatre’s production of It Could Be Any One Of Us. Yes I know, it was written by acclaimed English Playwright Alan Ayckbourn who has written over 70 plays that have been translated into 35 languages and has been lauded with numerous awards including the 2010 Tony for Lifetime Achievement in the Theatre. Yes I know, multi-talented theatre darling Meg Roe would be directing. And yes, I even knew that the cast had the potential for great things. But see, the thing is, I’m just not a screwball mystery kinda gal. Or at least I wasn’t until all the talent mentioned above came together to create a fun, funny and thoroughly entertaining night in the theatre.

The play opens in a country house inhabited by three adult siblings – all of them total artistic failures. The older brother Mortimer is a composer of atonal and atrociously awful irreverent melodies who never amounted to anything despite winning a music award as a young man. His only talent these days is his ability to be cantankerous and downright nasty to his siblings. His sister Jocelyn is a well-meaning but flighty mystery writer who started to write 34 books but has never managed to actually finish a single one of them.  Then there’s Brinton, a tremendously odd and eccentric weasel of a man who claims he’s a painter though no one has ever seen his work.

The drama begins when Jocelyn’s boyfriend Norris (an insurance investigator who desperately wants to be a detective) comes home and gets into a fight with Mortimer who, in a fit of rage, reveals that he intends to shut his siblings out of his will and instead give the house to a former student of his named Wendy Jones. Carrying out his threat, Mortimer invites Wendy to visit the house and survey her inheritance and almost immediately the attempted murders begin with Wendy being the target of 3 separate potentially fatal incidents. Now of course there’s finally a real murder in the house and don’t worry, I’m not going to spoil the first part of the mystery here and tell you who is actually killed. But its giving nothing away to say that Norris, the wanna-be detective, is more than delighted at his chance to finally solve a real crime. He quickly takes up the murder investigation with gusto, but does about as good as you would expect from an untrained insurance salesman. There’s all sorts of wrong accusations and ridiculous deducing and hiding of evidence until the final scene when the real killer is revealed.

Or at least one of the three killers is revealed – it depends which night you see the play. Ayckbourn is known for experimenting with themes surrounding chance and uncertainty in his scripts and here he takes it one step further and has actually written three separate endings to the play. In the opening scene, the family plays a game of cards which the audience sees as just a regular part of the action, but for the actors, this is the critical narrative moment. Whoever draws the highest card (not shown to the audience) is the murderer for that evening’s performance and the rest of the cast has to adapt accordingly. Frankly I found it a little bit gimmicky and I don’t know that it really adds anything to the audience experience but I’m sure that its great fun for the actors and it certainly seemed like they were having a good time with it.

Goodness knows I was having a good time with them. This is one of the strongest ensemble casts I’ve seen in a long while, with every single one of them delivering a jewel of a performance that was equally funny, smart and fully realized. Russell Roberts as Mortimer was downright and deliciously insufferable, Elinor Holt as Jocelyn had warm but ultimately clueless caring down to a humorous art, Ella Simon as Jocelyn’s daughter Amy played teenage sulking and attitude without any of the usual clichéd sand traps and Vanessa Sabourin as Wendy played the straight woman with impeccable timing. With all these fantastic performers I’m somewhat loathe to single one out as the star, but for me it was Paul Welch as the idiosyncratic Brinton that shone the brightest. With no holding back, Welch gave a very weird and wonderful performance that could have been easily over the top and grating.  But with his balance of just the right amount of physical humour, high emotion and quirkiness I found myself soundly laughing every time he was on stage, sometimes even in spite of myself at things I normally wouldn’t have found funny. It was a tremendous performance in an outstanding cast.

Also impressive was Director Meg Roe. Perhaps better known for her work on stage, directing a mystery was brand new for the much awarded actress who has also never herself acted in a thriller type of play. However the newness didn’t damped the result and Roe’s direction was extremely sure footed and I believe played a large role in my enjoyment of the production. Roe moves her cast constantly throughout the play either in action or in scene and prop changes and her choices are visually stimulating and exciting to watch.  Just as important is her handling of the comedy in the play. Roe lets the reins out enough to let the jokes fly but never so much as to spiral into goofiness and that kept the show witty instead of slapsticky and kept me happily engaged and eager for more.

It’s not often I am this surprised at liking something in the theatre and sure, this type of genre is never going to be top of my personal favourite list. But It Could Be Any One Of Us is a great production, the performances are outstanding and it’s a witty enough script to keep your brain working. This is truly one of those, go and have a good fun night in the theatre, kinda shows. And with quality like this, I’m all for it.

For everyone – It’s funny, it’s light, it’s extremely well-acted, directed and produced. It might not blow your socks off or stay with you for years to come, but for one delightful night in the theatre, you can’t do much better. SEE IT