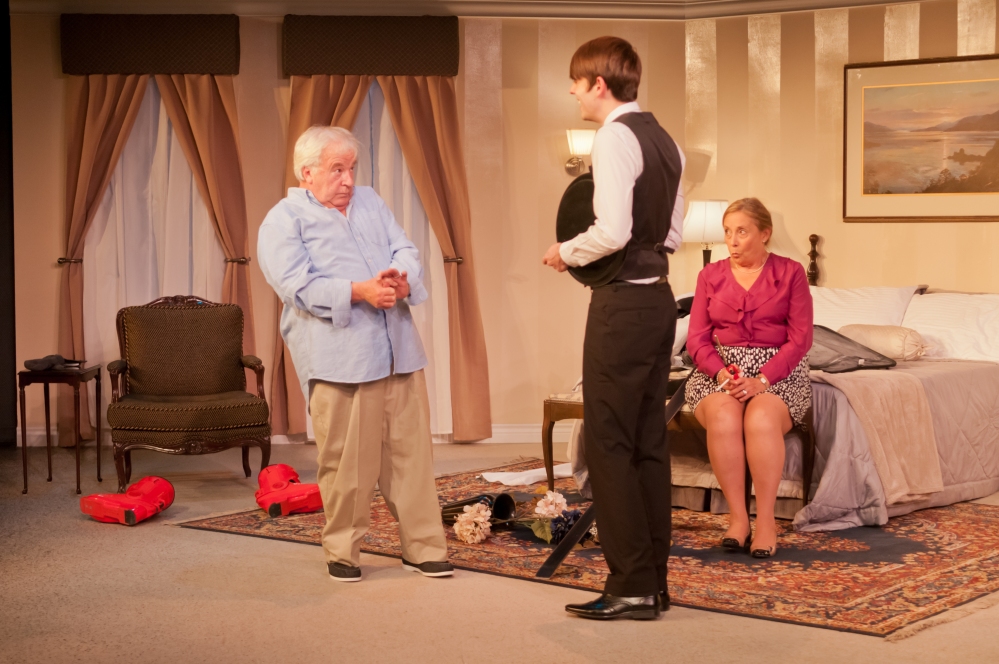 When describing my creative tastes, friends have often remarked that the more disturbing, challenging or dark something is, the more guaranteed I am to like it. And while this is true most of the time, I am by no means immune to the charms of a cute but smart comedy. After all, you’ve gotta lean into the light and laugh once in a while! Happily, Caroline Russell-King’s world premiere of Second Chance, First Loveaffords this pleasure quite heartily through a sweet but intelligent story of former lovers reuniting for a possible return to romance. Actually, when I say heartily I should qualify that the pleasure factor for me rang at high levels for the first 90% of the performance and then distinctly went off the rails at the close of the play – but more on that later.

The story takes place entirely in a room in the Palliser, a swanky hotel in downtown Calgary (designed disappointingly threadbare by Julia Wasilewski). Zelda, a 64-year-old ex-actress has rented the room for her former stage partner, Stanley (a minor acting celebrity also in his sixties) who is in town to perform at the less than critically esteemed Stage West Dinner Theatre. Originally Stanley’s agent had him booked at the downmarket Blackfoot Inn, but Zelda, who has gone on to great wealth due to marrying well, has arranged better digs for her old partner. As she nervously arranges the room and herself for Stanley’s arrival it is apparent that the two were not merely work partners but also romantically paired and that this reunion may not just be Platonic.

It doesn’t take long after Stanley’s arrival at the hotel (which is one of the funniest entrances I’ve seen in years) for the two former lovers/partners to cut through the small talk and expose the raw and sometimes funny truths about their personal lives and theater careers and the possibility of an affair. Or at least an affair for Zelda. Stanley’s wife passed recently and although he was a serial cheater all during his marriage, he promises his feelings for Zelda are relationship-driven and that he wants a second chance to make a life with her. Zelda’s husband is still very much in the picture but is, as she describes him, “a human doing, not a human being” who works all the time and barely see her. Feeling ignored and unloved and bored with her choices in life, it doesn’t take Zelda long to wriggle out of her clothing and ‘support’ underthings in a hilariously written and performed scene and climb into bed with Stanley.

Russell-King is not bashful in the admission that her play is an homage to the great American playwright, Neil Simon. Like Simon, Russell-King’s script tackles the issues and concerns of regular people through a dialogue-rich mix of humour and bittersweet seriousness. It’s a popular model that many have imitated but not all have gotten right. Second Chance, First Love, while not being of the same quick wit and erudite dialogue as a Simon, gets the formula mostly right never falling into cliché or farce to make a point. Or at least it didn’t until the last scene. But for the second time in this review, I’ll reserve discussion of that until later.

First though, a nod to the performers that helped make this play so much fun to watch. From the moment he entered the stage, dressed for Calgary like we lived in perpetual horrific winter, Wes Tritter’s Stanley was a comedic gem to watch. Never overplaying his lines or physicality, Tritter gives us a Stanley that is part cad, part little boy, but all loveable in spite of his failings. A character that we may not know personally, but in Tritter’s hands, one that we absolutely believe could exist and would probably love to hang around with.

Valerie Pearson as Zelda brought the house down in her undressing scene due to her comedic timing and brave ability to show vulnerability on stage in both her physical and emotional semi nakedness. Kudos must also go to Director Gail Hanrahan for her superb staging of this scene. However, playing a somewhat repressed and uptight woman can dangerously lead to some stiff and uptight acting and while Pearson avoided that pitfall whenever playing against Tritter onstage, I felt that without his foil her performance was much less dynamic and natural. Thankfully these scenes were few and of less importance and gave ample room for her to show off her potential in this script.

Less successful was Adam Beauchesne as Jason, the hotel worker. Partly due to a poorly written role (note to the playwright, don’t make Guns N’ Roses jokes to an audience that you know will be predominantly senior citizens) and partly due to acting that felt thin and disconnected, Beauchesne’s time on stage was throw away at best and his plot points unnecessary distractions.

But even with some rough character and narrative edges, Second Chance, First Love had the elements to be a splendid middle brow comedy with an unexpected and extremely moving and compelling ending. But instead of dropping the curtain when Stanley had to suddenly leave the hotel to tend to an ailing friend, the play barreled onward and downward into farce-ville. Pairing Zelda and Jason once again for the final scene simply brought together the two weakest components of the story to undo all the brilliance that went before it. The narrative was absurd as was the acting that accompanied it. I actually found myself wishing I could block out the final minutes of the performance so as not to have to mar my memory of the play. Unfortunately as a reviewer, this isn’t part of my job description. So I watched, and I have now commented. Hopefully with a little luck and time, I’ll forget the last 10 minutes or so and instead remember fondly this delightful and clever play that made me happy not to be disturbed.

For the guys – Whether you’ve let one get away or not, you’ll relate to Stanley’s desire to rekindle past love and find his methods hilarious in the process. SEE IT

For the girls – Zelda’s undressing scene alone is worth the price of admission. But so are many of the other discussions and situations the narrative covers. SEE IT

For the occasional theater goer – You will laugh all the way through and never be uncomfortable with the language or sexual situation. SEE IT

For the theatre junkie – If you can turn off your brain during the final few minutes of the play, you will enjoy a fabulously fun, not overly formulaic hour in the theatre. MAYBE SEE IT