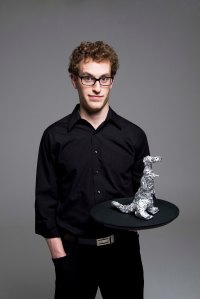 Waiting to go into see the show this eve, my friend and colleague, Calgary Sun Theatre Critic, Louis Hobson and I were talking about our Fringe experience thus far and we both concluded the same thing. While we had seen several plays we liked, some we even really liked, nothing had blown us away yet.

Little did we know that was all about to change with Tinfoil Dinosaur, a one-man show about making it as an actor with a social anxiety disorder.  For those of you who regularly read my reviews, you know that I rarely gush and the number of standing ovations I’ve given can be counted on one hand. Well hold onto your hats because not only did I enthusiastically stand and clap, I actually think my love for this performance and performer is in danger of tipping the bounds of critical propriety. But I will of course attempt to rein it in professionally and give you a proper  critical analysis of the play. Just know there is a part of me that simply wants to turn in a review that says YIPPEE!!!!!

Tinfoil Dinosaur written and performed by Sam Mullins begins with, unironically, a tinfoil dinosaur. One that Sam makes onstage to the accompaniment of classical music. In spite of the obvious display of talent in being able to form such a creature, the audience has no idea why we are being treated to this feat. Once completed, the dinosaur is given to a member of the audience and Sam’s monologue commences.

The story starts when Sam is still an acting student in Victoria and is forced to play a horrendous part in a hideous play.  They play itself would have been bad enough to act in, but Sam, who is white,  is roped into playing a 1920’s southern black man in full black-face makeup and he is certain the role will cause such a stir that it will land him on the evening news, and not in a good way. He manages to avoid being personally pegged as a bigot, but the play bombs, the reviews of his performance are not pretty and the whole experience leaves Sam devastated, unsure about his talent, and full of anxiety about the future. So much so that he moves away from his beloved girlfriend, moves to Vancouver and tries to leave the whole experience behind him as he attempts to make it as an actor in the big city.

There’s just one problem. Ok, actually there are many problems from financial issues to missing his girlfriend to a building management board that keeps fining him for ridiculous infractions of some secret code his is unaware of. But the real problem is that Sam has a social anxiety disorder. He is antsy around people and he obsesses over everything he says and what people think of him. While he says he doesn’t “suffer” from the disorder (“It’s kinda like a superpower, that I wish I didn’t have”) there’s no getting around that it’s terribly undesirable for someone who wishes to make his living as an actor.

The rest of the monologue plays out in a ‘dealing with/overcoming’ kind of narrative using comedy, drama and emotional suspense as the arc. It’s a popular storytelling model that we’ve all seen before. However under the guidance of Sam’s incredibly smart, funny and erudite writing and a performance that hits the perfect emotional intensity, this popular model is turned into something glorious.

Whether Sam is playing himself or the characters in his story, his delivery is natural, subtle and elegant. Never once does he overly reach for the emotions, instead they all seem to flow effortlessly with impeccable timing whether he is causing the audience to laugh or choke up. It’s been a long time since I did both in a performance and I had forgotten how good it feels to be affected so.

Equally impressive was the writing. There is no doubt that this is an extremely intelligent writer who loves words, and he peppers his dialogue with deliciously sesquipedalian phrases that somehow never come off as pretentious. (Unlike that last sentence I just wrote.) Ahhhh….a comedic writer doesn’t underestimate the intelligence of his audience. Hallelujah!

So enthralled was I with this entire production I could have happily sat through another hour of Sam continuing to talk about his life. But eventually the story must end and the tinfoil dinosaur must be explained and even though I wanted more, being taken on such a perfect journey by such an extraordinary artist was a gift that I won’t soon forget.

For the guys – This isn’t a woe is me kind of story. While Sam does struggle, he does so with humour and class. You will respect him immensely for it. SEE IT

For the girls – You will laugh and your heart will break and I defy you not to end up with a crush on him. SEE IT

For the occasional theatre goers – It’s wordy and talky but there is a definite story line and it’s one that you’ll find compellingly funny and touching at the same time. SEE IT